Welcome back to Deep Cuts, our twice-monthly interview series with a free story and author discussion. 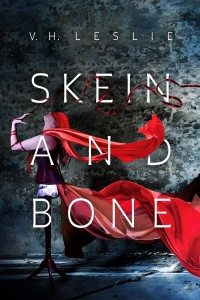 Today I am incredibly happy to welcome our guest Victoria (V.H.) Leslie and discuss her story “Senbazuru.”  “Senbazuru” was originally published in Shadows & Tall Trees #4 (Undertow Publications 2012), but was reprinted online at Weird Fiction Review.  Victoria is an accomplished storyteller, with short fiction appearing in numerous publications and several published novellas.  Her first collection, Skein and Bone, will be released by Undertow Publications later this year.

“Senbazuru” has been a favorite of mine for years.  The British consulate milieu in World War II-era Japan and the attention to period detail set it instantly apart, but the dreamlike narration and deep layers of allusion create a potent mixture of (ir)reality.  Like the paper cranes that give “Senbazuru” its name and guiding motif, the story reveals itself through folds and creases as the narrator shifts through time and memory, obscuring one shape while creating another.  Finally, the clear, beautiful language and controlled demeanor of the prose make this a story to remember.

Here’s your last chance to read “Senbazuru” before the discussion, because **SPOILERS** follow:

HELLNOTES: Let’s start, as we usually do, at the beginning. “Senbazuru” means “Thousand Origami Cranes” and it is, as the story explains, often times a wedding tradition, although it also has other cultural connotations. What was the spark of this story? What kind of research did you do for it, and how did that research fit within the actual writing process?

Victoria (V.H.) Leslie: I used to work as an English lecturer at a college and one day there was a display in reception made up of hundreds of origami paper cranes. One of the students gave me one and I pinned it to my notice board when I got home, knowing there was a story there but not quite knowing what it was. I often do this. I collect objects, images from magazines and stick them up around my house, and usually, after gestating in my subconscious for a while, a story forms. In this case, I liked the idea of using paper as a motif and once I decided that, I structured the story around various paper items or allusions – marriage certificate, money, travel permit, newspapers and even the paper, scissors, stone game. Because origami was so important in the story, I also decided very early on to set the story in Japan, though I wanted a British viewpoint. Setting the story during WWII seemed like the perfect way to explore two cultural perspectives during a time of conflict. I researched Japanese foreign policy but I was keen to keep the focus of the story on internal relationships between the characters.

HL: The structure of the story is interesting in how it folds and unfolds back and forth through time with a dozen scene changes. From a technical standpoint, were these transitions part of the first draft and your original design? Or did you approach it chronologically, then shift the pieces?

VL: It took a while to revise. Layers were added later at different points, though it wasn’t originally written chronologically. As I mentioned, I’m quite a visual writer, so I’d already planned a few key sections then it was just a matter of weaving the narrative around them. I also knew I wanted to play around with narrative viewpoint and as the plot became more fleshed out, I was able to go back and change things slightly and to add more depth.

HL: “Senbazuru” seems to share certain elements with Charlotte Perkins Gilman’s “The Yellow Wallpaper”, another story about an imprisoned woman and one that you wrote a non-fiction essay on for Shadows & Tall Trees. Reading the two stories together, there appear to be clear nods from one to the other – for instance, the narrators have similar views from their respective windows. Aside from those surface elements, however, how much of a thematic influence did “The Yellow Wallpaper” have on “Senbazuru” and what connections you see between your protagonist and Gilman’s?

VL: I’m really pleased you noticed. Yes, there were certainly a few nods to “The Yellow Wallpaper” in terms of physical spaces and perspectives but I did also wanted to draw on similar themes, such as entrapment and madness. Like Gilman’s protagonist, I wanted Elaine’s sanity to be questionable and to imply that she is imprisoned because of a mental or emotional breakdown. In ‘The Yellow Wallpaper’ there are allusions to the attic space she is confined within as being an asylum – there are bars on the windows and the beds are strapped down. Similarly, the windows of Elaine’s round tower are locked and Horiko jangling keys imply that she is some kind of warden. Coupled with the pills Elaine is compelled to take and references to Elaine’s mother, I wanted to suggest Elaine’s tower is actually a medical facility. Also, in a similar way that Gilman’s protagonist was obsessed with the wallpaper, Elaine is driven by the creation of her paper cranes, which becomes more all-consuming as the story progresses.

“The Yellow Wallpaper” isn’t my only literary reference. I also allude to the Lady of Shalott, a figure who is similarly imprisoned with only her tapestry to keep her occupied. Tennyson’s poem was based on the Arthurian legend of Elaine of Ascolat, hence where Elaine’s name comes from. I wanted to draw on the idea of the princess in the tower and to suggest that Elaine with “her head in the clouds” prefers the world of make believe, which accounts for her delusional tendencies. Essentially, I like the idea that Elaine is also under some kind of enchantment, living in her mind, instead of facing up to what’s really going on around her

HL:   Gradually, the story reveals the unreliability of our narrator. The attack of the paper cranes is the certainly dramatic, but it’s the subtler moments – like the offhand revelations that her husband was found dead and that Horiko never returned from the market – that do so much to unravel the reader’s ability to trust even the narrator’s most mundane memories. To me, however, this schism reaches its climax in the drama of the final few paragraphs where the narrator throws the stone through the window, yet a few paragraphs later, the stone is back in her hand.   At what point did you realize that you intended this series of reveals and how did that affect how you approached writing the “unreliable” elements in the first instance?

VL: I realized quite early on that I wanted to write from an unreliable narrative perspective but many of the reveals came later on as the story became more fleshed out. The difficulty was deciding how much to reveal. I enjoy reading stories when the author has left the reader scope for interpretation, but, as a writer, it’s hard to hold back and not spell it all out. It was enjoyable writing from this kind of perspective though, especially the surreal segments, like the dream sequence, though I was keen to hint at a logical explanation in each case – for instance her behavior could be dependent or influenced by the medication she is on. I also liked the idea of playing around with cultural notions of East and West and I wanted to invert significant landscapes. For instance, is Elaine really in the East during her incarceration, or actually in the West, back in the same facility as her mother (suggesting some kind of hereditary mental illness). I also explored this inversion earlier on with the cocktail party, with the exchange of fashion and customs between the Japanese and British guests. The round tower, with its four viewpoints lent itself nicely to this idea, though the story was more about a mental landscape than a literal one.

HL: Finally, which of your stories should readers seek out if they want to read something similar? What about something completely different?

VL: As you mentioned, I have a non-fiction piece on Gilman’s “The Yellow Wallpaper” in Shadows and Tall Trees # 5 but my first story “Ulterior Design”, which appeared in Black Static also alludes to Gilman’s seminal work. Entrapment seems to be a common theme within my work and stories like “Namesake” – which was originally published in Black Static and reprinted in Best British Horror – and “The Quiet Room” – published in Shadows and Tall Trees #6 – look specifically at the idea of imprisonment and the suppression of the female voice. I also have a novella due out later this year from Salt Publishing, which explores some of the themes of my earlier stories, particularly madness, hysteria and female agency as well as drawing on myths and legends.

In terms of something completely different, my story ‘The Cloud Cartographer’ which appeared in Interzone and Best British Fantasy was a complete departure from my usual style. I also have a Cthulhu story coming out later in the year from Crystal Lake Publishing.

Victoria (V.H.) Leslie‘s short stories have appeared in a range of speculative magazines and anthologies, including Black Static, Interzone, Weird Fiction Review, Strange Tales IV and Shadows and Tall Trees. She also writes non-fiction for a range of literary publications and is a columnist for This is Horror. She was recently awarded a Hawthornden Fellowship and the Lightship First Chapter Prize. Her debut collection Skein and Bone is due to be published later this year by Undertow Books. For more details on her work please visit www.vhleslie.wordpress.com.

Next Time:  A change of pace, with two webcomics by Emily Carroll – “Out of Skin” and “The Hole The Fox Did Make.”