Welcome back to Deep Cuts!  This is the second entry in our twice-monthly series interviewing authors about one specific, free-to-read story.

Today our guest is Michael Wehunt, discussing his recent story “Bookends,“ which was published last year in The Journal of Unlikely Entomology.  Michael is an author to watch, but already his work has appeared in such horror and weird fiction mainstays as Innsmouth Magazine, Shadows & Tall Trees, Shock Totem, and (soon) Cemetery Dance.

Somewhat like last week’s story by Nathan Ballingrud, “Bookends” is a story about loss and grief, but the real value in comparison is to note the very disparate ways that Ballingrud and Wehunt seek to resolve this theme.  Pay attention to the way Wehunt’s well-developed and nightmarish setting is built up around the unique formal structures which give it a propulsive momentum.  With the movement guided by these touchstones  . . . or bookends . . . the reader can focus on peeling away the layers, digging into the hints of the otherworldly that emerge from Michael’s rich prose.  For me, the story changes shape even as it’s being read and re-read, which is a true miracle of rebirth.

Hellnotes: “The Journal of Unlikely Entomology” is a fairly specific journal within the Unlikely Story umbrella – its stated mission is to publish only “fiction about bugs.” What inspired “Bookends”? Did you begin it with “Unlikely Entomology” in mind or was finding the right home serendipitous?

Michael Wehunt: It was serendipitous in that I happened to finish this story after the submission window for the Entomology issue opened. I love what they publish, so it was a lucky fit.

As for inspiration, I’d been having this morbid, sad thought: How would a man reconcile new fatherhood with new widowhood? How would he feel toward this infant that is now entirely dependent upon his care and love, while he’s too full of grief to feel clearly? The death of a mother during childbirth was once a very real risk, so this tragic shift in dynamics surely has many precedents. But I personally had never seen any exploration of it.

Another image that had stuck in my mind for a while: someone standing in a back yard, at lowering dusk, listening to the overwhelming sound of cicadas. I was intrigued by the cyclical nature of cicadas, their interesting lifespans, and by what might have happened to that person in the thirteen years since they were last here. And these elements sort of locked together in a loop.

HL: This isn’t your first insect(ish) story. I’m thinking in particular of the recent “Onanon” in Shadows & Tall Trees Vol. 6 (Undertow Publications 2014). Your use of insect motifs place you in good company and, considering their respective uses, I would even say Bookends:Blue Velvet::Onanon:The Fly. What is it that has drawn you to this particular swarm of imagery? Is there a specific interest (or revulsion) behind it?

MW: At the risk of exposing myself as a repetitive hack, “Bookends” is my fourth story to feature insects. Like many, I find the detached alienness of bugs fascinating, and the concept of a swarm/hive is certainly rich with imagery. But while cicadas carry a symbolic resonance with me, my use of stinging, flying insects has a more atavistic explanation: They are the only thing I’ve ever encountered that stirs a true shudder in me. Well, those and death. I also fear losing the people I love, and so these scary things keep coming back to me.

HL: The visual “bookends” and interspersed numbered entries are the most immediately noticeable structural element of the story. Even during a first read, these sections convey that initial flurry activity and subsequent buried torpor of the cicadas’ lifecycle. What intrigues me, however, is the academic tone of those numbered sections, which read almost like encyclopedia entries. Within that, however, there’s one standout in entry No. 3 – where that same detached voice turns it focus from the cicadas to directly describe their personal meaning to Paul and Annie. How did you decide on this structure, and what was your intent with that particular entry?

MW: When I finished this story, I felt that certain elements could be read in different ways. I was aiming for realism with the hint, the possibility, of the weird or surreal. Since it was published in a journal most known for speculative fiction, I’ve been interested to see if or how that might skew one’s reading of it.

The encyclopedia-like numbered entries, though, are meant to be a comment on the endless, mindless cycle of the cicadas, the academic or scientific nature of the insects. But they had become such a powerful bond between Paul and Annie, and for her to die upon their return would feel like a sharp betrayal to him. I found Paul to be a man grasping for reason and answers, and the way the cicadas “bookended” his time with his wife gave him something to blame…and out on the rim of possibility and causation, perhaps he is right to do so. This is where that third entry comes in, the abstract connection and intertwining of the cicadas with Paul and Annie, and how it’s so personal for Paul that he could truly feel his fate was tied into theirs. In a story where a sane man is planning to murder his own newborn, I felt it was crucial to highlight the depth of his struggle to come to grips with his grief, lest he come across as mentally unbalanced and nothing more.

HL: At first, the cycle of the cicadas seems almost coincidental – a way to heighten the dramatic tension – but, on subsequent readings, there seems to be some guiding design to it all. Paul himself notes the unlikely timing of Annie’s pregnancy and death (“’It’s not just the baby that did it,’ he said. ‘Why couldn’t she get pregnant until just before you [the cicadas] came back?”’) Tellingly, the phrase “predator satiation” repeats, drawing just enough attention to itself before Paul freaks out and slaughters vast swaths of the bugs, but apparently exhausts himself enough in the process to come to some semblance of reason. Was there a controlling instinct, or maybe even a plan, behind these events? If so, how did this aspect of the story develop as you wrote it?

MW: You could say the whole story is about his paternal instinct and love slowly surfacing. The first steps toward coming to terms with Annie’s death and becoming a father. He begins to delay the murder, rethink it, almost subconsciously. Again, like I tried to convey with the numbered entries, Paul is trying to fit the cicadas—their biology, their dormancy and mating habits, etc.—into the story of his own life and love and procreation. He’s trying to fit the mythology, so to speak, of his own family within that of these insects that meant so much to him and Annie. He goes so far as to think of the baby as insectile, emerging from her mother and leaving a “husk” behind. And in doing so, he is able to see his baby as less than human in order to do what he plans, even referring to “it” instead of “her.” I kept feeling the story tell me it was going to end with an ultimate horror if I didn’t find some light, and I like to think that love will out, even in the face of terrible anguish.

HL: Other than my recommendation of “Onanon,” which story of yours should readers look for if they want to read more of the same? What about if they want something completely different?

MW: Sticking with the bug motif referenced above, I’d point out two other stories with six-legged stars. There’s a run-down trailer full of bees in “Notrees” (my debut publication, in Innsmouth Magazine #10, 2012) and a man who is allergic to wasps in “Stabat Mater” (Shock Totem #8, 2014).

Free-to-read non-insect stories: “Everything, All at Once, Forever” (Read Short Fiction, 2013) and “Beside Me Singing in the Wilderness” (Crowded, 2014). These both deal with grief, albeit it in different ways.

In just a few months, my story “A Discreet Music” will appear in Aickman’s Heirs, a tribute to the great Robert Aickman published by Undertow and edited by the esteemed Simon Strantzas. I also have a story in an upcoming issue of Cemetery Dance later this year. 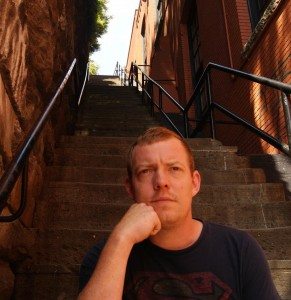 Michael Wehunt lives in the lost city of Atlanta. He was born there and it’s even possible he might die there. By day he writes business copy for clients, so it’s only natural that by night the monsters find their way into his words.

You can find more about Michael at his website (www.michaelwehunt.com), on Facebook, or Twitter (@michaelwehunt).  For more about “Bookends,” check out Michael’s interview with Unlikely Story.