Dead Snow: Red vs. Dead to Premier at Sundance 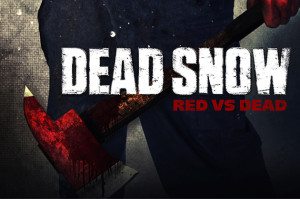 I’m not going to lie to you.  I really had no intention of watching Dead Snow.  I’d seen it on Netflix when I was looking for a good horror flick to while away the hours, but this one just didn’t seem to catch my eye.  Man, was I wrong.  Fortunately, two of my adult children and my high schooler convinced me to give it a try.  Now I’m a dedicated fan.  Imagine my delight when I saw that Dead Snow: Red vs. Dead was going to premiere at the Sundance Film Festival.  I won’t be able to see it there, but I do look forward to seeing it soon.  In the meantime, here’s a trailer for all of you Dead Snow fans:

From the Sundance guide: If the worst day of your life consisted of accidentally killing your girlfriend with an axe, chain-sawing your own arm off, and watching in horror as your closest friends were devoured by a zombified Nazi battalion, you’d have to assume that things couldn’t get much worse. In Martin’s case, that was only the beginning. Picking up immediately where the original left off, Dead Snow: Red vs. Dead wastes no time getting right to the gore-filled action, leaving a bloody trail of intestines in its wake. This is directed by Norwegian filmmaker Tommy Wirkola, of the first Dead Snow as well as Kill Buljo: The Movie and Hansel & Gretel: Witch Hunters. Død Snø 2 premieres at the Sundance 2014 at Midnight. You down?