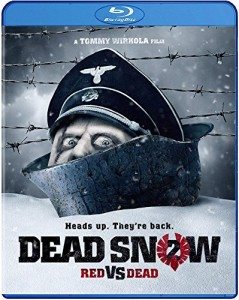 Dead Snow was a Norwegian import from 2009 that took everyone by surprise. It was a throwback to a time when movies were gloriously gory and goofy just for the hell of it, complete with that now overlooked, but at one time staple of schlock cinema: Nazi zombies. The movie made a name for itself, and rightfully so, for being fun, playful, and having the beautiful scenery of Norway as a backdrop. Oh, and the fact that it was very well directed, shot, and acted was nice too. Now, five years later, writer/director Tommy Wirkola and stars Vegar Hoel and Ørjan Gamst return for more fascist flesh-eater fun. Is the second time also a charm, or is this a sequel no one wanted? Well grab a gun, perhaps even a chainsaw, because were going back to war against undying horrors from Hitler.

Now before we get going, as with any foreign films, there is always a contingent over here in the good ol’ U.S. of A that don’t like ‘em. “I don’t want to read no movie!” they shout while they (insert your favorite lazy, stupid American serotype here). Well on this Blu-ray the default version is in English, so for all you subtitle haters out there, you have no excuse not to see this movie. But still, should you?

Well the answer to that is a big fat hell yeah.

It picks up right where the last movie left off, with our lone survivor, Martin, still on the run from the villainous zombie commander, Herzog. One insane accident latter, and Martin wakes up with the undead Nazi’s arm sown on to his body, and before you can say, “I can’t control my evil hand,” hijinks right out of Evil Dead 2 soon follow. However, as big as a pain in the butt as the evil arm is, it also contains the power to raise the dead and have them follow the lead of the arm’s owner. That’s not only cool, in a creepy sort of way, but necessary, as Herzog and Co. are on the march to take out an entire nearby city, and now thanks to a World War II museum, they have a tank! All out hero, Martin, has to fight that is confused museum attendant, three American nerds that make up the Zombie Squad, oh and a bunch formerly dead Russians he just brought up as his own zombie army to do battle with the rotting Nazis.

The Evil Dead 2 example I made earlier is an apt one for this whole movie. While the first film had more of an over the top horror vibe too it, this one is far more played for laughs. There is still plenty of gore galore here, but it’s more of a whacky action flick than anything horror related. Does that make it a bad move? That’s a big fat hell no, but it is a noticeable, albeit subtle, change of flavor. So as long as you know that before going into this, and you’ll dig this highly digable flick even more.

On to the special features on this new Blu-ray. First and foremost, in addition to the English version of this movie, there is also the complete International version which is in Norwegian, for all you language purists out there. In addition, there is a very entertaining audio commentary by director/co-writer Tommy Wirkola and co-writer Stig Frode Henriksen. Oh and don’t worry, the commentary is all in English. There is a short film called “Armen” that’s 14 minutes long and was a little slice of silly fun about a guy who gets an arm transplant, so you can see why it would be included here. There is a featurette on the digital special effects that runs just under two minutes, and last but not least, there is a short preview of the Dead Snow comic book included here and the ever present trailer.

Dead Snow 2 is more of what made the first movie so good. It is the rare sequel that doesn’t disappoint, and while it does do a few new things, it stays true to the spirit of the original. If you liked Dead Snow, you’ll like this follow up. If you didn’t, then this won’t change your mind. It gets a very high recommendation from me.