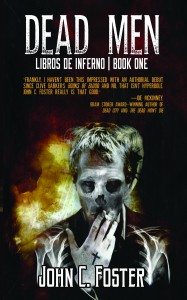 John C. Foster’s Dead Men is a fascinating, entertaining and challenging new horror novel. As the subtitle, Libros De Inferno: Book One, makes clear it’s the first in a new trilogy. It’s a dynamic opening chapter, but it plays equally well as a single novel. The story arc wraps up nicely while leaving enough room for more of the story to be told. The book isn’t an easy read and there’s no room to get complacent and fall back on the familiar elements of the story. There are no familiar elements. Dead Men is a nightmarish road novel propelled through an America of dark and ugly places and strange and awful characters.

Without spending too much time describing the story, which I would have a tough time doing anyway, it is the tale of the Priest, Hoodoo Girl, Spike and four dead men named John Smith. Each Smith, who choose different monikers to clear things up, who have been executed for mass murder. They awake in an isolated and largely abandoned asylum, where they find each other and escape. They burn the asylum around them as they flee, starting a theme recurring throughout the book of the whoosh-hiss of a light and flame roaring to life in the darkness.

The John Smiths trip their way through a version of America similar to, though much darker and more weird than our own as they attempt to ascertain why they were resurrected and try to fulfill the task put to them by the mysterious puppet master, the Priest. The characters are bizarre and rarely well defined, the author striving for atmosphere and creepiness rather than depth and reality. This works for the most part as the majority of the players are transitory, only popping up for a short time to advance the main characters to the next point in the story.

The John Smiths are interesting and individual, two going by Alice and the Ghoul, and the Priest’s mysterious presence is compelling. The Butcher, Lum, the Director, the Doctor are just used in passing and have little substance. The weakest character is Spike, who plays a major part in the book’s second half, and never achieves the appeal of the others. The only slow points in the narrative are during those second half passages focusing on Spike.

The world these characters inhabit is very dark, both in the literal and figurative sense. Everything feels like it’s happening at night, and considering the haunted trains, abandoned asylums, makeshift prisons and maternity wards that host the action, daylight doesn’t even seem possible. The settings have a nihilistic and oppressive feel as hilltop cemeteries and mythic crossroads do.

In the novel the “Libros de Inferno” is described as an “antediluvian text” which imparted knowledge that almost cost the reader their life. Dead Men doesn’t come at that price, but is not an easy read. It has the guts to demand something of the reader, that an effort is required to take in the book, an effort that will be well rewarded by a unique and lyrically beautiful tale of terrible things.