Dead in the USA – Book Review 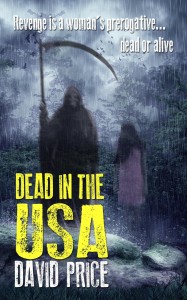 Set in the heady days of 1995, David Price’s supernatural thriller “Dead in the USA” is a time capsule of events and ideas of that bygone era. It’s a little bit campy, a little theatrical, and a strange, flashy ride. Oh yeah, and it’s got The Boss.

After a night of revelry culminates in the murder of nubile co-ed protagonist Kimberly French at the hands of a serial killer known as The Scalper, the personification of Death offers Kim the choice of Oblivion or Vengeance. Electing Vengeance, Kim’s quest for justice dovetails with the Boston Police’s investigation –who are themselves accompanied by the production crew of a reality television cop show. This deductive ensemble is guided by Kim’s attempts to communicate through dreams, screams, and the camera’s viewfinder to a climactic showdown high above an arena fit for a 90’s summer blockbuster.

This novel’s greatest strengths lie in its strong sense of place and time. The feel of the mid-90s abounds – beepers, “bummer”s, ecstasy, professional wrestling, TV cop shows, and Bruce Springsteen in his comfortable stadium-filling stage. The other key element to the setting is the city of Boston itself, however fictionalized it may be. The feel of the neighborhoods and the club scenes, particularly those involving the catalytic Buried Pleasure strip club, are layered with detail. The novel’s quick pace, gory details, and frantic scrabbling towards a slam-bang finale above a stadium also feels very much of the time period. It’s a winking fun-run through 90’s sensibilities before the wave of New Miserablism and gritty reboots came to the fore.

One of the more interesting layers to the story is Price’s concept of the personification of a disinterested Death. A black sheet kept aloft by the “spiraling darkness, a bottomless void” that meets the questions of the newly dead with glimpses of the life denied and the Great Mystery, Death’s initial passivity apparently reflects the recently-deceased Kim’s transplanted Malibu blasé. However, although in Death’s initial appearance It serves primarily as a plot-mover, but it reappears during the Epilogue to force a reconsideration of the novel’s themes. This final appearance is an interesting line drawn under the proceedings, bringing in a few capital-B Big Ideas to mull over.

Price’s ideas are strong but while there’s clearly a lot of thought behind the world and the characters, the writing is sometimes overstuffed. For example, the story stops for several full pages to give us television camerawoman Stevie Li’s entire history, more than the show’s host and both police detectives combined. At other times, the sentences rush forward to make up for lost time and key events are abbreviated or come across as perfunctory. There’s promise here, though, and what Price does going forward will be worth watching.

“Dead in the USA” is a quick, breezy read with a unique sensibility and fun sense of setting. Although it sometimes stumbles a bit, for the reader that’s willing to engage it on its popcorn-thriller level, it’s a fun ride with memorable highlights. And, really, where else are you going to find a monster mash of Bruce Deadsteen and the Dead Street Band haunting the dreams of spandex-clad serial killer?  Nowhere, that’s where.