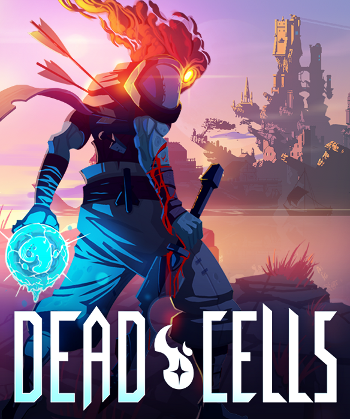 This new, downloadable game is usually described as a “roguelike set in an ever-changing castle.” For those who enjoy gaming but don’t speak gamerese, a roguelike is “a dungeon crawl through procedurally generated levels, and permanent death of the player character.” Now this isn’t exactly that, but it is close. My best definition would be a spiritual successor to the original Castlevania. Here you play as a little glob of…something that takes over the dead body of a knight. You are a prisoner inside a vast castle on an island and you want to get out, but standing in your way is all manner of horrors. From slimy skeletons that lunge at you, to bats that chase you down to blow up in your face, to giant corpse worms, to zombies (in regular and purulent flavor), cannibals, golems, slashers, and more.

Now the good news is that you can’t die. Whenever you do, you just start over as a sentient glob of goo and possess another dead body. The bad news is you lose all your weapons and cells if you were carrying and unspent ones. You see cells you get for offing enemies and they act as your experience to level up your skills. So there is a bit of Dark Souls in your loss of them, but here it’s even harder as you start all over from the first, starter level. Oh and here’s a twist to that too, as all levels are randomly, procedurally generated. This means you’re never 100 percent certain of the path you have to go to make your way back to where you got killed.

As for the gameplay, Dead Cells is an action platformer; that means lots of running and jumping mixed in with side scrolling hack and slash combat. Now the actions are fast and fierce, so you’re going to die a lot until you learn the tricks of your enemies and how to utilize your variety of skills and weapons to the max. In other words: get good. But the game seems remarkably fair with none of the usual cheapness some games employ to make things seem challenging. So you get a real sense of accomplishment as you make progress. Along the way there are elite variants of your usual foes to test your mettle, and of course there are the bosses. From a hulking undead brute, to a gigantic eyeball-thing suspended by chains and other weird things in between. These fights will provide the ultimate test of your skills; luckily the skills you get to master are on a generous timer, generously short that is, and that allows you to use your best attacks quickly and you will need that slight advantage if you hope to escape this cursed and haunted island.

As for the story elements there is a mystery as to who, or what, you are and why the island is populated by corpses, both walking and not. It is clear a doom has come to the land, but what exactly comprises that doom is left for you to find out. And if all that sounds too heavy and a bit of a bummer, fear not, the game always has a fun, if somewhat dark, sense of humor that had me laughing on more than one occasion.

Dead Cells is a fun hack-and-slash platformer through a haunted house of dungeons, sewers, clock towers, and castles. If you remember the old Castlevania games and were a fan of them, then you’ll love this updating on that classic gameplay. Consider this one well recommended.