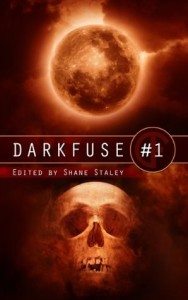 Independent press DarkFuse publishes horror fiction, and from the get-go, they’ve embraced just about every sub-genre from dark, psychological thrillers to classic monster tales. The second half of their name is appropriate, as several of DarkFuse’s authors blur the categories, resulting in literary mash-ups like supernatural sci-fi or hardboiled detective horror. Fear takes many forms, and DarkFuse has proven receptive to all of them.

That open-mindedness about what horror is makes for a diverse assemblage of short stories. The first volume in a projected anthology series, DarkFuse #1 is like a micro-collection of the publisher’s entire library. The authors have varying degrees of writing credits, and their work spans the genres. What they have in common? They all write dark.

The anthology opens with a strong story, “She Sleeps in the Depths” by William Meikle, a Scottish writer of Lovecraft-inspired stories and novels. The protagonist is infected with an earworm in the form of an old sailor’s song. The sea shanty’s words and tune haunt his sleep, though he doesn’t recall ever hearing them anywhere else. When he meets a woman infected with the same tune, they pursue its secrets together. Much weirdness ensues.

A man’s car crashes down an embankment in E. G. Smith’s “Jaws of Life,” leaving a man mangled, in agony, and barely alive.  Smith’s writing about the crash is evocative enough to make for some empathic squirms of pain. A pair of children who happen upon the car could be his ticket to rescue, but there’s something abnormal about them. Swift death just might have been preferable to the slow, torturous ordeal encountered in this freakish hillbilly valley.

“Clayton James saw the devil the night his wife died.” That’s how Christopher Fulbright opens “Children of the Horned God,” and if that sounds promising, you should enjoy what follows. The Devil might be the least of Clayton’s worries in this occult American Gothic town where even the reverend and the deputy threaten outsiders. There’s a reason these rural folks stick together, and it’s got nothing to do with playing checkers.

Rounding out the collection are William Eakin’s “Carrion Fowl,” a bleak, stylized piece of post-apocalyptica in which humans become cannibalistic bird-like creatures; “Better Seen and Not Heard” by Michael Penkas, a twist on the monster-under-the-bed trope; and “Netherview” by Gary MacMahon, which might make you think twice before taking a home tour.

Anthologies are almost a dime a dozen these days and the quality runs the gamut, but DarkFuse’s collection is free of filler and worth the cover price for the curious. It’s a good way to get a taste of what the publisher has to offer before you take on one of their novels. If you enjoy what you see here, you’ll definitely want to go deeper into the DarkFuse world.