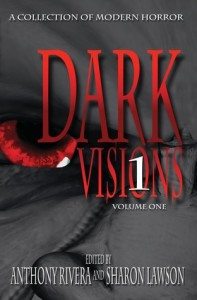 There is a need for horror more than ever before as it is pure escapism in a broadly sinister way. This first volume of Dark Visions is edited by Anthony Rivera and Sharon Lawson and made up of 13 short and terrifying stories by some of the most interesting horror and slipstream writers in the business. Some I recognized, like David A. Riley and Sean Logan, while I think I will have to check out other works by the authors I am unfamiliar with.

According to the blurb, this compilation of stories acts as a guide book for the evil minions that lurk within humankind and try to destroy it. Think of The Twilight Zone introduction from the popular TV series, and you will get the idea that this compilation is more than just a series of short fictional works. It is touted as a guide book where humanity must survive at all costs, and in these they rarely do. The book caters to both old and new readers who still like to be scared, though don’t want to spend too much time on reading a full novel. For those who are unfamiliar with any of the authors, they can get this book and sample whether they will like to read more of the author’s work from the stories, so from the reader’s point of view it can open up a whole new set of authors they can rely on to give them a real good scare.

The eerie thing is, the stories all start in the most normal possible way, with some wanting to live without pain, a young man trying to shed his troubled past and a man who is plagued by nightmares he can’t fathom.  “The Troll,” by Jonathan Balog reminded me of Neil Gaiman’s “Troll Bridge,” even with its description of a young boy trying to escape the bullies who traumatise him every day at school. Life can be lonely, but what he finds under the bridge can more than make up for it.

David A. Riley’s “Scrap,” concerns two brothers living in England who have been abused at the hands of those who should be caring for them. What they see as a new opportunity to turn their lives around turns out to be anything but. David lures readers into the plot and shocks with the greatest of ease.

Sean Logan’s “Raining Stones,” takes readers to San Francisco this time where some horrific murders have taken place. Lonnie has dreams and hallucinations of what has happened, but thinks they might be real. It is the reader’s task to find out if they are figments of his imagination or reality.

The cover artwork is in red and black showing only a single eye cut off from the rest of the face and does the job of creating that haunting first impression.

I would recommend Dark Visions for anyone who wants to seek out new and interesting writers in the horror field who could become popular favorites in the months to come.