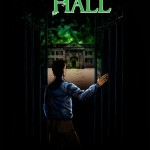 Matthew Tait’s Slander Hall for the first time in trade paperback for only $6.99

Description: Fifteen years ago the affluent gated-community of Slander Hall was the setting of the largest mass suicide in U.S history, dozens of men and women committing the ultimate sacrifice and embracing the covenant of their leader to shed their bodies for a life in outer space. Now a modern ghost town, it boasts only the decaying and derelict phantoms of a withered populace. Cedar Jarrell, sole survivor of the holocaust that claimed so many, returns to the dark heart of Slander Hall on a final pilgrimage where not all who take the journey will survive …

Also included in this edition are two more tales – stories that put the reader into a disturbing world of lunacy and paranoia that could be just around the corner for any of us. In Car Crash Weather, childhood trauma will ultimately shape the future of a successful horror novelist. With The Grief School, Matthew Tait evokes unsettling imagery as one man is forced to pay off a debt through a trail by suffering … and discovers a dark savior in the process.

Matthew Tait was born in Australia in 1977. Like many writers he has held far too many jobs, including co-managing a video store. And although it seems a prerequisite for any writer, he’s played rhythm guitar in a few bands as well.

From 2005 until its closure in 2011, Matthew was an assistant editor for the award-winning Australian news and literary criticism zine, HORRORSCOPE. He now writes for HELLNOTES.

In 2006, CAR CRASH WEATHER was awarded a commendation from the Australian Horror Writers Association.