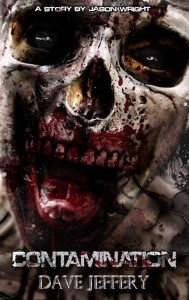 “If someone isn’t getting beaten up in the first five pages of the book, something is wrong.” This is according to pulp fiction aficionado Dustin Rahn.

Contamination, a book written by author Dave Jeffery based on a story idea by filmmaker Jason Wright marks a return to the horror children of the 80’s grew up on.

Protagonist Dean Sharp wakes up from a drinking binge to find that overnight, the world has changed. People are dying in the streets as mobs wander aimlessly through town looking for the next fight. Men and women tear into one another on sight, as even children join in the fray.

“Contamination was a story I had been writing for awhile, and wanted to make into a film, but there were so many other things going on, we didn’t have time.” Jason Wright explained. “It made sense then to make it into a book first, and then film it later so people have time to read it and experience it themselves first, before it was filmed.”

After being introduced to Jason at a festival by mutual friends, Dave Jeffery sat and talked with the filmmaker for hours about the project. Together they spoke of the outline for the book, and the direction it would take.

“When Jason first showed me the outline for Contamination, I couldn’t help but see it as a pulp project.” Said Dave Jeffery. “The story had a gritty, brutal aspect and played with chronology which made it interesting to take on.”

While the birth of Contamination was unusual in the writing realm, with a novelist and filmmaker working together on the project, the creation of the book is unique as well. Wright, with his company, Silent Studios, will begin filming of the movie version in 2014. But to release the book first, the team needed a publishing house.

Jeffery, whose novel Necropolis Rising hit the #1 position in the UK last year, approached his publisher, David Youngquist, at Dark Continents Publishing about getting the book into print. After skype meetings with both Wright and Jeffery Youngquist green-lighted the book for a May 2013 release.

“The writers in Hollywood are always complaining they don’t have enough fresh ideas,” Youngquist said, “why not have a novelist involved from the beginning.”

As a small press in the era of instant communication and technology that allows people and companies to work together from opposite sides of the globe, the people at Dark Continents are always looking for new innovations and ways to reach more people and develop more markets. A partnership with a film studio provides just that, but getting Silent Studios further into the literary world, and Dark Continents into the realm if film.

Contamination is currently available in both stores as paper books, and as downloadable files for your e readers. Get a copy and follow the fast paced story as Dean Sharp tries to sort out reality from his dreams, sanity from madness as the fate of human kind hinges on him.