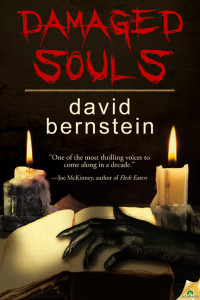 Set in New York, “Damaged Souls” starts off with a demon that a town has cornered. The priest is driving him off, and back to Hell. Munyok, the demon, returns to the fiery pit whence he came, but it’s far from over. The story is just beginning. Fast forward to the next part of our tale in which a man, John Crawford, gets rear-ended by an irresponsible, reckless driver who buys John off with the offer of cash so that he won’t involve the police, to which John agrees. Little does he know that he’s made the worst mistake of his life by letting this man drive away.

When the police show up to John’s house the next morning, he thinks it’s because they have a score to settle with him about the accident and his payoff, but they bring unimaginable, tragic news that his daughter has been killed in a car accident. And the culprit is none other than the guy who rear-ended John the previous night. For most parents, it’s unthinkable that they will outlive their children. Many (understandably) can’t cope with the loss, which is something that no parent–no human being–should ever have to suffer, but countless do. John decides that he can’t take the anguish anymore and he takes his own life. He thinks he’s gone to Purgatory, but he has become what’s known in the book as a Partial, someone Hell releases with demons to hut the gates of Hell. He has to stop a particular demon, Munyok, before he opens the gates.

John’s wife goes through one emotional turmoil after another until he returns out of his coma. Unfortunately, Munyok also finds a way to return and starts a killing spree through one his lackeys. The plot points and tension escalate until the final confrontation at the end that’s built up over the course of the chapters, and although a resolution does occur, the reader will get a sense that there may be a continuation to the story should the author choose to expand it. Overall, for supernatural thriller fans “Damaged Souls” delivers more of what we’ve come to enjoy from David Bernstein–fast-paced, exciting, page-turning plots that will keep you turning the pages.

Having done zombies and vampires, it was nice to see Bernstein tackle demons, and although it’s familiar territory in the sense that we’ve seen plots like this before, it’s still a gripping story that horror fans should gobble up with delight. It makes for perfect Halloween reading. Instead of watching hackneyed TV show specials and movies that come around that time of year, pick up “Damaged Souls” and indulge in a good fright.