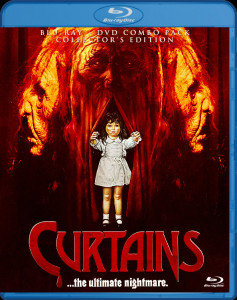 There are quite a few companies that release classic horror movies on Blu-ray and DVD, each with their strengths and weaknesses. Some have great extras, others release a ton of titles, and some specialize in putting out the obscure and forgotten films. What Synapse Films does is release the best looking movies. Period. No one, but no one makes a movie look as good as Synapse does, even if it is one of those forgotten flicks I mentioned earlier. Even if the movie in question have only been part of a multi-pack DVD, looked like hell, and never had an ounce of work put into it to making it look any better. The film I’m here to talk about today is one such ugly, seldom thought about today movie, the slasher/thriller Curtains from 1983.

Curtains is a bit of an odd fit in the slasher genre. Most of the time they are tales of teens going off to party, have sex, and then get killed. Curtains is a slasher for adults with a mature cast. It’s more about thrills than cheap titillation, but it’s not without its memorable moments. Chief among them is a bit involving some ice skates and a sickle, but I’m getting ahead of myself a bit. Let’s start the show like all good shows should start; at the beginning, with the raising of a curtain.

John Vernon is an egotistical movie director named Stryker who wants to make his masterpiece, a film based on a book about mad, passionate, vengeful woman named Audra. In order to really nail that crazy bit down, Stryker’s lover and usual leading lady, Samantha Sherwood (played by Samantha Eggar) goes for some method acting and gets herself committed into an insane asylum. Then wouldn’t you know it, Stryker goes and leaves Samantha in the nuthouse after she starts acting crazy for real, and decides to hold auctions at his wintery home for the part of Audra with a bevy of new beauties. Samantha leans of this, doesn’t like it for one bit, and so she escapes the asylum and crashes the auditions.

So, you probably know what’s going to happen from that set up, right? Yes, someone starts bumping off the other actresses one by one, and here is where we get to the slasher-y part of the movie. The killer in Curtains wears a decrepit, old hag mask and has a fondness for sharp objects. Sadly, while there are some good stalk and slash scenes, one taking place on a frozen lake being truly great and the highlight of the show, they are all basically bloodless. Now a good masked maniac movie doesn’t need gallons of gore, I mean, you have seen the original Halloween, right? However, a little bit of the red stuff is always welcome in my favorite slashers and I do wish there could have been a bit more here.

That being said, I have always liked this movie a lot. I called it a thriller/slasher in the intro to this review, and that’s what it really feels like. As such, there is a seriousness to it that is usually lacking from the majority of movies that cashed in on the slasher craze of the early eighties. All the actors deliver fine performances, with Vernon and Eggar being the two seasoned standouts. The direction is more than ably handled by veteran director of photography, Richard Ciupka, despite this being his first time sitting in the big chair.

As for the new Blu-ray from Synapse Films, in addition to looking absolutely amazing, it comes with a few special features. First, there is an audio commentary with actors Lesleh Donaldson and Lynne Griffin. There is a collection of audio interviews with the producer, Peter R. Simpson and actress Samantha Eggar. There is a “vintage featurette” called “Ciupka: A Filmmaker in Transition” which is a 1980 short about the director of the movie and his transition from director of photography to film director. There is a making of/retrospective featurette about the making of Curtains that runs 36 minutes. Lastly there is theatrical trailer.

Curtains is a fine fright flick made by adults, for adults. It is a serious movie, but still loads of fun, capable of more than a few thrills and chills, and it has never, ever looked as good as it does here. Yeah, I know I’ve been harping on the good looks of this Blu-ray, but really, it is amazing how bright, vibrant, and just plain great this movie looks when you can actually see it. If you are already a fan of Curtains, then this is the definitive edition to have. If you’ve never seen it, well now is the best time to do so. Consider it highly recommended.