‘Cry Havoc’ is Set to Drop This November Because Who Doesn’t Want Mankind Fighting with Dinosaurs Against Aliens? 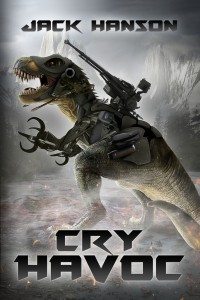 Arizona-based novelist and federal agent Jack Hanson will be celebrating the release of his highly anticipated first novel CRY HAVOC this November, 2014. Drawing on his experiences during his two tours in the Iraq and Afghanistan wars, Hanson has transformed his observations about the tragedies of human relationships during times of violent conflict to craft a truly unique and thrillingly classic science fiction tale. To sum up CRY HAVOC in one sentence: Intelligent dinosaurs and humans fight alongside one another against aliens in the future. This is one story certain to be embraced with fervor by true fans of the genre.

“CRY HAVOC is reminiscent of Heinlein and Asimov rolled into one fast paced story with a fresh slant from a talented young writer. The characters are well defined and likeable. I’ve been a sci-fi fan since I could read and I’m looking forward to the sequel of CRY HAVOC!”
— Deborah D. Moore, author of THE JOURNAL: CRACKED EARTH

SYNOPSIS:
Everyone serves in the Terran Empire. Everyone. It will be the last touch of youth for these four cadets before they are thrown into the grinder of war.

The Epsilon Squad do not like each other – they are a mass of conflicts and self-doubt. Their instructor, a veteran of a hundred close assaults, does not care about their petty concerns. He has been instructed to bring them together whether they like it or not.

They are the keepers of a secret forty years old, each one the custodian of the legacy of humanity’s greatest champions. To repair that legacy is the reason they were brought together, but it remains to be seen if they can overcome their own flaws, rise to be the heroes they were born to be, and Cry Havoc.

When asked about the themes contained within CRY HAVOC, Hanson replied, “The Cry Havoc arc takes place at the end of an eight or nine book cycle, of which the last three books are the final trilogy. If the entire series has any major overarching theme, it’s of friends coming together, breaking up, and reuniting again. It’s been a theme in my life, minus the entire reuniting part. Its been my own tragedy that I have not been able to come together with my friends over the years, and it seems like many times the last time I see someone is truly the last time because Things Happen.”

He continued on to say, “There’s also a large sense of anomie that pervades the characters, a sense of separation from everyone else. This was one of the things that made writing the dinosaurs so bittersweet, since the ones who actually go into the military tend to adopt our mannerisms and habits. It reminds me of the separation between veterans and civilians, and how there always seems to be that dividing line between the two populations.”

You can find more information about Jack Hanson on his various pages: