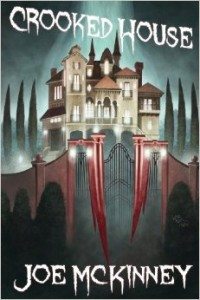 Joe McKinney’s Crooked House has all of the elements necessary for a successful…and deeply eerie…tale of a haunted house.

It has a central family, in this case two parents and a child, the parents keeping their own secrets while working to hold the small group together. Individually and as a whole, they are fragile, their reality verging upon becoming a nightmare. For Dr. Robert Bell, the impending catastrophe takes the form of an onslaught of bills that he will never be able to meet, coupled with just having lost his teaching job at a Florida university due to a “catastrophic meltdown.” For his wife, Sarah, it is the persistent threat that her daughter’s natural father will somehow convince the courts to grant him full custody. For both of them, it is the sense that their lives, their marriage, their fundamental connections to each other are unraveling.

Into their darkness comes a sudden offer of redemption: a new position at Lightner University in San Antonio (which is, by the way, a wonderfully suitable name). And with it comes the unexpected bonus of free housing, not in some stereotypical cookie-cutter unit but in a house that is indisputably a mansion. And here the true nightmare begins to insinuate itself. The house, while “simple, even elegantly so” and not unattractive in spite of its fourteen bedrooms, conservatory, formal entrance, and all of the other trappings associated with wealth and power, is…well, crooked. Bell’s first reaction is that it is haunted. In light of his immediate impression, he is wary: “I’ve read my Henry James, my Shirley Jackson. Christ, I even read The Shining. This place is crawling with ghosts, isn’t it?” Then he enters.

And there it is, the sine qua non of haunted-house fictions, the notorious Bad Place that systematically attempts to destroy those who enter.

Even though Crook House—named for its builder—is located in an upscale part of San Antonio, it is as isolated and as isolating as the Overlook Hotel or Hill House, although more psychologically than physically. From the moment Bell walks in, he feels uncomfortable, out of his element, and weighted down by a wrongness that has nothing to do with Crook House’s size or checkered past. And every moment he spends within its walls, every moment that Sarah and their daughter Angela spend there, something essential is leached from them, altering the personalities and their relationships. Most of the story takes place inside; and those passages that do not merely emphasize the extent of the changes taking place.

The story covers nine days, concluding on Christmas Eve day. In those nine days, McKinney methodically strips the characters bare, penetrating the secrets they have struggled to keep, and setting up a series of devastating revelations, the repercussions of which echo backward and forward, contorting every assumption that Bell, Sarah, and the readers have made about the family and their abrupt good fortune.

The ending is appropriately savage, bloody, and ultimately discomfiting. McKinney has learned well from James, Jackson, and King; the story concludes with a certain ambiguity, an uncertainty that locks the story firmly into the uncanny. It is not, perhaps, a just ending, certainly not a Pollyanna ending, but it is entirely appropriate to this particular Bad Place, to the cast of characters and their complex interactions, and to the histories—those alluded to and those in part developed—that form the backdrop of Crook House.

Crooked House is a seamless read, riveting from the first page to the last…and in some important ways, unsettling from the introductory quotations from Nathaniel Hawthorne, Anne Rivers Siddons, and D.H. Lawrence. Everything about the book compels interest; emphasizes darkness and dread, isolation and disintegration; and results in a solid reading experience.