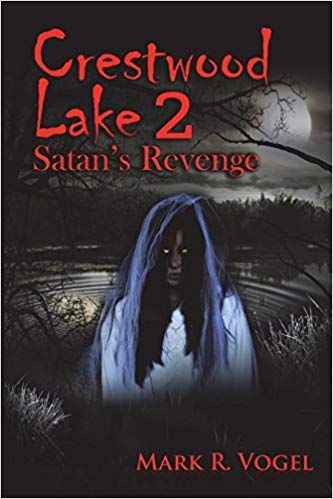 This is the second book I’ve reviewed by Mark R. Vogel and just like The Ripper’s Time, Crestwood Lake 2 delivers a lot of bang for the buck. Rich, well thought out storylines build tension until the last few pages in which much (but not all) is revealed. This makes for an excellent conclusion that still leaves room for yet another volume in the series if desired. Even though I missed Crestwood 1, this installment is written so well that we can easily to slip into the world inhabited by Vogel’s characters. In my opinion, this is a big plus for any book in a collection. This means the author is really thinking about their readers and wants to invite them in, not penalize them for not reading things “in order.” Two thumbs up to Mark R. Vogel for engaging with us right away and seamlessly bringing us up to speed!

After a quick historical insight into the existence of a very powerful and evil person, we’re in Crestwood Lake, Vermont. Police chief Captain Butch Morgan is at Toby’s Tavern getting ready for lunch with his best pal, Gil Pearson. These guys have been through a lot together and are a bit like an old married couple. Morgan is a powerful man who likes to blast his way through everything he does, while Gil is smoother and more polite in his choice of vocabulary. Instead of an adventure, it looks like the police chief is getting ready to retire and spend a lot more time with his wife Vicki. But that plan goes out the window real fast when a seemingly unrelated series of events reveals something that Gil and Butch have worried about for a long time. Satan and his coven of witches have returned to Crestwood Lake. Retirement is officially over.

But as readers of this fast paced and fun novel will find out quickly, Captain Butch Morgan is more of an action-oriented kind of guy than a happy retiree. At the age of 55, he does stuff that most fellows in their 20s couldn’t pull off! He’s a person who doesn’t let fear or political correctness stand in his way. At the same time, anyone foolish enough to assume Morgan is just a gun toting country bumpkin will be proven wrong. In short, he’s just the guy you need in a situation that includes witches, demons, Satan, crazy ex-boyfriends and crooked judges. Vogel creates nice balance small town chumminess and chuckles with wide-eyed terror in Crestwood Lake 2. Satan is everywhere, so some of the action is in Italy and involves sacred artifacts that can’t fall into the wrong hands. There is lots of action, with a battle royal being fought in caverns underneath Crestwood Lake. Who will win? Will the sacred items stay safe? Is it possible to slay Satan?

A lot of people say that good writers often put parts of themselves into their stories. Mark R. Vogel proves that point by making good use of his thirty years of experience as a clinical psychologist in many parts of Crestwood Lake 2. The profiles of the characters involved include some psychological profiling and quite a bit of the action happen in hospital wards. As is the misuse of drugs and alcohol by people who are self-medicating their depression. What’s real and what isn’t? Vogel also makes excellent use of his culinary skills in many parts of the book to make scenes ultra-realistic. This includes various meat dishes being prepped and cooked in a restaurant. He also uses Captain Morgan’s choice of beverages to strengthen his character. Butch wants a shot and a beer, even when something more upscale is available, because a trustworthy person doesn’t change their stripes. Well done!

Crestwood Lake 2 Satan’s Revenge is a 5 Star read all the way through. I heartily recommend that you pick up a copy at your earliest convenience! While you’re doing that, take a few minutes to check out Crestwood Lake 1 and The Ripper’s Time –a treasure trove for the many of us interested in the mysteries of Jack the Ripper! Vogel is a certified expert who uses much of his research to create fiction that is historically accurate. He can bring people back from the dead! Well. On paper anyway. Mark R. Vogel’s Crestwood Lake 2 -This is the good stuff!