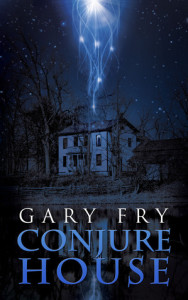 It seems every small town has one, the abandoned house that always has a creepy story attached to it.  For Anthony Mallinson, The Conjure House appeared to devour his younger brother after he and several friends dared Simon to enter the house.  He never returned.

After the mysterious murder of his parents, Anthony, or Ant as he is affectionately known, returns to Deepvale and to the house he grew up in.  With him are his wife and young son.  While outside playing, young Carl makes a new friend, a young boy called Suman.  Ant soon discovers that Suman is the name of one of the previous occupants of the now abandoned home and the child that Carl has befriended looks much like his brother Simon.

In order to save his own son from the conjurer Suman, Anthony calls together his friends who were there the night that Simon disappeared.  Together they learn the secrets of Suman, the house, and memories long since buried.

Fast paced and well written, the Conjurer House harkens back to old world horror with a bit of Lovecraft thrown in for good measure.  Mr. Fry’s style is almost literary, which makes the prose flow from the page. What Suman (the conjurer) is after will totally take you off-guard – you won’t see this one coming.  It is a story that will keep you turning pages (or flicking the screen of your eReader) until you reach the end.

There were a few things that I felt could have been improved upon – the most obvious being why did Anthony not include his wife more fully in what was happening to their son.  I believe that Mr. Fry possibly envisioned this more as a ‘Stand by Me’ or ‘It’ type of story where childhood friends got together to solve the bizarre happenings.  If so, he would have probably served the story better by sending his wife Melanie back home to begin packing their belongings for the move back to Deepvale and keeping the boy with him.  Yet, that’s neither here nor there – just a minor nit pick to an otherwise wonderful novel of suspense, horror and old mysteries solved.

I look forward to reading more by Mr. Fry in the future.