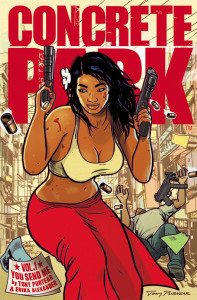 To paraphrase Pat Benatar, (in Concrete Park), Hell is for sexy post-adolescents.  The graphic novel depicts the lives of young, urban detainees, exiled to Scare City—a place with a barrio feel far from Earth; a place that has many of the qualities that we would attribute to Hell.

In terms of the writing, the voices are stark and salted with street slang.  The writers wisely provide us with a glossary of terms that are specific to Scare City.  What is most important is that voices are given to the politically hushed city kids, to the underprivileged, to the gang members. Volume 1 is an introduction to the characters and they are presented with a bullet-like quickness.  The main characters of You Send Me are Isaac, a street tough who introduces us to the mechanism that sends the outcasts to the correctional planet Oasis; and Luca, a cagey gang leader whose soft interior is shown in her thoughts about her lover, Lena.  It is evident that Isaac and Luca’s paths will join in a meaningful way in future volumes.  There are many other compelling characters including a shape-shifter, a gang-leader “The Potato King,” and a DJ whose tracks can be heard on the companion website concretepark.com.

The artwork is masterful.  Puryear’s drawings are rich with ethnic detail, going beyond stereotype to depict individual characters that teem with heat, anger and sexuality.  Puryear makes subtle social commentary in his drawings; for example, there is a depiction of “Sugar Street: the ho stroll” in which three women in burka-style dress are placed in front of billboards featuring nude women with words like “hit it.”  The contrast resonates with contemporary readers, even though the story takes place in the future and on another planet.  A character says, “Across town, something is burning.  Something is always burning,” and the artwork, with its orange, brown and mahogany tones contains the qualities of a smoldering fire on the verge of combustion.

This is a very adult graphic novel with mature language, nudity and enough guns, blood and bullets to satisfy a Tarantino fan.  It is a slick commentary on the choices the “have nots” are forced to make.  The overarching question of Concrete Park is whether the characters will find redemption and live in a world of external and internal peace, or whether they will destroy each other.

It is evident that Puryear and Alexander take great pride in the world they created, and they should.  Though Concrete Park is housed within the fantasy genre, it is stridently honest.  Its gaze is set directly upon characters that represent a hidden underclass.  It is no wonder that Concrete Park was named one of the Best American Comics of 2013.