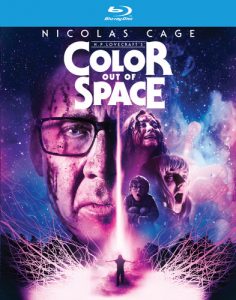 Press Release: LOS ANGELES – RLJE Films, a business unit of AMC Networks, will release the critically-acclaimed sci-fi/horror film COLOR OUT OF SPACE on VOD, Digital, DVD and Blu-ray on February 25, 2020.

Based on the H.P. Lovecraft short story, COLOR OUT OF SPACE stars Nicolas Cage (Mandy, Leaving Las Vegas), Joely Richardson (The Patriot, “Nip/Tuck”), Madeleine Arthur (To All the Boys I’ve Loved Before, “The Family”), Brendan Meyer (“The OA,” The Guest), Julian Hilliard (“The Haunting of Hill House,” The Conjuring 3), Elliot Knight (“American Gothic,” “Once Upon a Time”), with Q’orianka Kilcher (The New World, Dora and the Lost City of Gold) and Tommy Chong (Up in Smoke, Cheech and Chong’s Next Movie). The film was directed by Richard Stanley (The Island of Dr. Moreau, Hardware), who co-wrote the screenplay with Scarlett Amaris (Replace, The Theatre Bizarre). RLJE Films will release COLOR OUT OF SPACE on DVD for an SRP of $29.96, on Blu-ray for an SRP of $29.97 and on 4K UHD/BD for an SRP of $35.97.

In COLOR OUT OF SPACE, after a meteorite lands in the front yard of their farm, Nathan Gardner (Nicolas Cage) and his family find themselves battling a mutant extraterrestrial organism as it infects their minds and bodies, transforming their quiet rural life into a technicolor nightmare.

The COLOR OUT OF SPACE DVD, Blu-ray and 4K UHD/BD include the following bonus features: