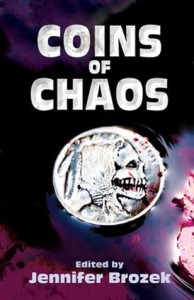 Known as the hobo nickel, this coin is handed out for a number of different reasons, for a stay in a strange place, sustenance, love or power over others. These nickels aren’t normal, though, as each person who owns one finds out. They are made by the Carver who has made them and placed inside them his hatred and wish for evil to befall anyone who has the misfortune to own one. In all, there are twenty coins, all 1913 Buffalo nickels made to look as though they are worth nothing. All the coins  give each person a different fate as the seventeen short stories will show; a hungry coin with a defaced Indian on the face, or a smiling skull and a skull with snakes crawling out of it.

The Carver shares his stories with us as he wants us to see his intentions for humanity, and before each story, he introduces it with a chance remark about the coins, while at the end of the stories, he finishes with a bit about the person involved and what happened to them later. One of the extras the reader gets is an illustration of the coin the character in the story owned, and they are all grotesque in one way or another.

Edited by Jennifer Brozek, Coins of Chaos contains seventeen of the best stories from various authors; Nathaniel Lee, Kelly Swails, Andrew Penn Romine, Jay Lake, Erik Scott de Bie, Nathan Crowder, Dylan Birtolo, Jason Andrew and Peter M. Ball. I have to admit that I flicked through the stories, and skipped the first one to take a look at the second one, “The Price of Serenity,” about Charles whose son had died in a house fire. As the fire had been his fault from the start, he has been estranged from his then wife, and, in a moment of madness he goes to see a fortune-teller at a fayre. Thinking it would be something to distract him from how bad he felt, he is prepared for the possibility she might be a fake, but when she tells him what is on his mind and what he has done before, he thinks she might have some answers.

This is one of the many stories that have a twist in the tale endings readers can enjoy as much as I did and I did think that this was one of the better anthologies Edge has to offer as the stories start back in 1913 and continue to 1928 and into the more modern day.