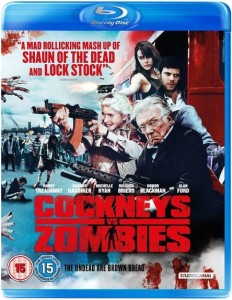 About a month back or so I reviewed this film when it came to theaters (albeit in a limited fashion) here in the States. You can find that review here:  http://hellnotes.com/cockneys-vs-zombies-movie-review. So this review will only talk about the plot of the movie (which is very good) in brief and instead focus on the new Blu-ray from horror masters over at Scream Factory.

Cockneys vs. Zombies is the latest zomcom (zombie/comedy) from the UK, the land that gave us Shaun of the Dead, and with CvZ they seem to be trying to prove that when it comes to laughing at the walking dead, the Brits just do it better. Thankfully it’s not just a retread of what’s come before. Sure it has shuffling dead guys in it, but it moves the action to London’s East End where it’s up to the titular Cockneys to not necessarily save the day, but just get out alive without getting turned into zombie chow. The action is equally split between some young thugs right out of a Guy Ritchie crime capper and some old fogies (he said with love) stuck in a rest home that’s scheduled to be demolished.

If the movie does have one flaw, it’s a minor one and that is it takes a bit for zombies to show up and the battle we’ve all been waiting for to begin. However, it not like what comes before that is boring, it’s just a little bit too much of preamble before the main event. But when it starts, when the young criminals try to kill a zombie with a steel plat in its head, thus making the old bullet to the head thing a bit difficult (and how come no one has thought of doing that before?) and one of the slow, shuffling old folks tries to outrun a slow, shuffling zombie with his walker, that’s when this movie really shines.

The zombie part of this movie is well represented with some gory practical effects that are used well here. Sure there are some CGI bullet hits in this flick, and I’m sad to say that they do stand out like a sore thumb. But for the most part the splatter is spectacular, and as eluded to before, the zombies are of the old, slow-moving kind, and I always appreciate that.

Then there is the comedy part of this zomedy, and thankfully it is rock solid and then some. I laughed a lot while watching this film. From zombie soccer hooligans, to a Cockney rhymer who only makes sense to himself, to Alan Ford as the tough and yet surprisingly tender granddad, there is a lot to like and to laugh at here.

As for the new Blu-ray from Scream Factory, it comes with some nice goodies on it to entice buyers, just in case the good movie alone is not enough. There are two audio commentary tracks, one with director Matthias Hoene and the other with writer James Moran. While both of these were informative, they could have been livened up a bit with the addition of some of the cast, who are noticeably completely absent here. There is a “Behind the Scenes Look” featurette that is broken up into eight parts, or can watched all together and runs about 30 minutes. There are over half a dozen deleted scenes collected here with individual audio commentaries from both the writer and the director. Hmm, are the two men just not talking to each now? Anyway, a theatrical trailer brings the special features to a close.

In the end, Cockneys vs. Zombies lives up to expectations and delivers what it promises with its title and the trailer. Sadly, many other films don’t, but that’s a discussion for another day. It is a bloody and funny joy ride that should be seen by any and all fans of zomcoms. It comes out on Blu-ray here in North America on Sept. 3rd and consider it highly recommended.