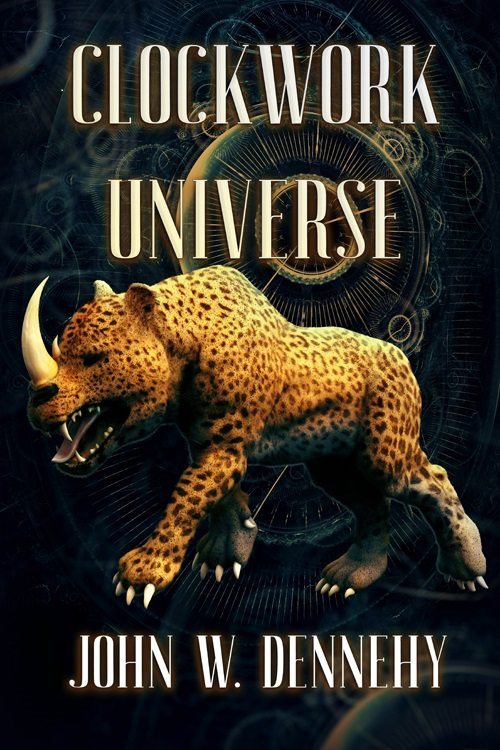 This book is John W. Dennehy’s debut with Severed Press! After reading Clockwork Universe you will be glad to know that two more books are upcoming in 2017! This book is a Steampunk Thriller, which means Victorian-era-style dress paired with fantastically intricate contraptions that are a mashup of old and new technologies to produce something like the steam-powered Land Rover that is used quite frequently in this novel. Dennehy has also inserted a punk rocker by the name of Kevin Barnes into his story as well. Not only that, but Kevin is a retro-minded punk who enjoys bands from the 70s and 80s such as the Sex Pistols, the Dead Kennedys, and Suicidal Tendencies. Even though there are many younger players, punk is truly a very old style of music and dovetails nicely with the idealism of the book. Highly traditional gets a modern twist and likes it!

Kevin, with his purple mohawk, jackboots, safety-pinned ears, and leather jacket, falls asleep on a train to modern-day Boston, but somehow ends up in a very different place than expected and with a beautiful woman at his side. Not that this is an entirely bad thing, but what to do? Where to stay? That quandary takes care of itself somewhat when he is asked to join a pair of men who are in town to hunt down the very dangerous and highly destructive Rhino-pards that have been terrorizing the city. The huge animals came to be through vivisection, a merging of two animals to produce the best and most ornate hybrid creature. Gave me just a quick thought of Wells’ Dr. Moreau, but different here. With the markings and feline grace of a leopard and the tough hide and big frontal horn of the rhinoceros, these are not animals to fool around with!

However, for Silas Cunningham and his very sharp partner, Niles, that is exactly the game plan. Cunningham is a giant of a man, with giant energy and a giant appetite. He and Niles use giant elephant guns as if they were mere rifles. These men are Steampunk superheroes, if you will. Constantly thinking, planning, on the move in a great variety of contraptions, and chasing down the bad guys in the gas-lit streets of Colonial Boston. Wow! They take Kevin’s punk rocker gear for oriental stuff that he picked up while doing a job overseas and this makes him self-conscious. So he steps into the restroom with a bag that someone left in his care while he was at the modern train station and to his surprise finds a suit of Victorian clothes that fit him just right. There is also a secret weapon that you’ll have to read the book to find out about!

Clockwork Universe picks up steam (ha!) very nicely as it goes along, until suddenly you are galloping hell bent for leather into the conclusion. “Damn and blast!” you’ll say, because you won’t want this book to be over! There are too many details, so much to explore, characters you want to know more about. Please write a sequel soon, Mr. Dennehy!

While this may be John W. Dennehy’s first book, he is no stranger to the writing scene. He has placed stories in many magazines such as Disturbed Digest and Beyond Science Fiction. His work has also been featured in many anthologies like SNAFU, and he has served with the U.S. Marines. All of which give him an excellent combination of life experience and writing skills to pull a book like this off. I liked the historical nods, which make the story all the more real. Highly recommended! Pick up a copy today!