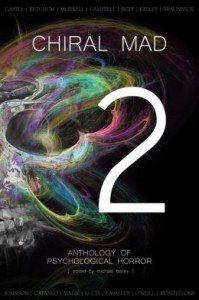 “Chiral Mad” – an interesting title/theme for an Anthology of Horror.

If you are unfamiliar with the meaning of chiral, I will attempt to explain. The word is thus described as “incapable of superimposing its mirrored image.” Let us use the mirrored image to illustrate this concept; although your reflection may appear identical within the glass, the image you see is in fact reversed. Your right is indeed your left. Yes, an illusion of sorts—Ahh… then there is Mad—insane, perhaps? Then again, that word we’ll leave to your own elucidation. Imagine now, the ideas linked to those two words—the creations of psychological Horror just waiting for you to turn the page.

Yes, the long anticipated release of the second in the “Chiral Mad” series (sorry Mr. Editor) has at last arrived! The creators of “Chiral Mad” have once again achieved a grand success in “Chiral Mad 2.” There are twenty-eight contributors; a number of well-known authors interspersed among those little known and a few newbies in the field of writing horror specifically, many returning to haunt your dreams. Each story lends its uniquely intrinsic touch to set your nerves on edge.

Before I delve into these delicious tales, I should credit the brilliant editor of this masterpiece. I must say, this reviewer found the intro by Editor Michael Bailey to be quite unique. I believe any reader would have to agree. You see, it was written as if the book itself were speaking directly to you, the reader. This, was by far the best introduction to any book this reviewer has read to date! Bailey is also the artistic hand which created the cover art. Kudos, Mr. Bailey! Yours is the creative mind at its best!

The editor, of course, has built the bones of this anthology and has done an amazing job at that. Twenty-eight stories by many a talent await your read—

The book opens with “Another Man’s Bones” by Mason Ian Bundschuh. The perfect piece to motivate the reader to hungrily devour the remaining 27 stories. The storyline is not only unique, but delivers the creep factor. In doing so, Bundschuh baffles and eludes, until you reach that final well-structured sentence. This essentially is a story of one man’s quest to eliminate the ultimate foe.  He is a writer this reviewer recommends you seek out beyond this anthology. What a treat, dear readers!

Ramsey Campbell has graced these pages with, “The Word.” A hateful reviewer, filled with malice, attempts to discredit a particular writer, who in turn deflects every means to destroy. We watch the main character’s obsession turn maddening before the climax.

Jack Ketchum, although the story is quite short, its impact does not disappoint in “The Right Thing.” It is a story of adoption you won’t soon forget.

Mort Castle engages us with “The Counselor,” a twisted tale of a man haunted by his own unfortunate deed.

There are so many authors to mention in this talent packed edition—although I cannot complete this review without mentioning Richard Thomas and John Palisano. In “Playing With Fire,” Thomas hits the proverbial thriller nail on the head with this brilliant piece of survival, both physical and psychological. John Palisano, a Bram Stoker Nominee at the time of this review, delivers with squeamish delight.  His addition to this phenomenal anthology, “The Geminis,” uses chiral and its meaning with an eerie eloquence. His words are poetic and descriptive. Imagery does not stand alone in Palisano’s voice but draws emotion from the reader—deep unfettered emotion, with a cry from somewhere deep within the psyche.

“Chiral Mad 2” speaks to us on a level of intellectual horror. These are not your average works precipitating the need to leave the lights on. These stories relate to the horrors buried deep within us all.

As with “Chiral Mad”—all proceeds go to charities for Down’s Syndrome. Pick up your copy of this book and feed your senses with a new form of Horror—that only “Chiral Mad 2”can provide.