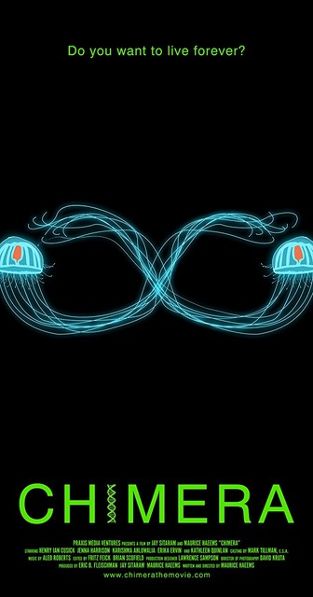 Chimera is one of those movies where the science behind it all is extremely controversial. From stem cell experimentation to harvesting organs from animals after gene splicing, this movie does it all. But the purpose behind the action is what comes to question.

Quint is a renowned scientist who’s gone underground. He’s now focused on doing nothing but saving his family, while being paid to assist a sinister woman by the name of Masterson. Masterson owns him, the life of her dying husband in the balance. Quint’s figured out a way to use genetic information from jellyfish to synthesize a necessary, human hormone that could make a human immortal, a super human. Masterson soon becomes threatening, abrasive, and near blackmailing to get the job done, but can he help her? Can he get past Masterson’s sinister involvement? Can he possibly find a cure to save his children, and is there a happy ending beneath all the blood and gore?

Chimera is a movie that baffles. The way it’s told is creative and rather clever, because you can’t tell what’s real and what is not. There’s a situation with his wife that’s unbelievable, let alone angering, but all done in the name of science and love.

At first, I thought I’d be left with questions, but thankfully they were all answered. It didn’t take long to figure out his wife was born with a genetic defect, passed on to their children. That’s not a spoiler by the way, but his children are a mystery. I was lost for a while, thinking they had telekinesis or something, but you get it after a while. There’s so much to wonder while watching, which is why I think I enjoyed it.

The movie took imagination, though the acting isn’t the greatest. I’m no geneticist, but I can say the time they took to develop the story made it well worth the watch. It tells a story of desperation, greed, and finally an ending befitting a foolish idea. Chimera releases in 2018.