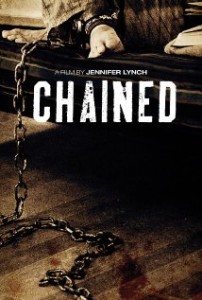 From the somewhat vague synopsis provided by other media, a viewer may garner the opinion Chained might be something akin to a (low budget) gritty urban thriller along the lines of Michael Mann’s Collateral. However, such notions are quickly dispelled as we bear witness to a terrified adolescent male rummaging through a box containing female identification cards. When a doorbell suddenly rings and the child looks up fraught, it doesn’t take a sleuth to ascertain a serial killer is about to enter the fray. Enter he does, and soon we have reached the garish conclusion that Chained will rapidly descend into the most taboo strictures of film-making – that any allusions of a crime/thriller are wholly discarded as the child cowers in fear and the screams of a new victim are heralded through the walls. Who is this child? And how did he come to be in such depraved circumstances?

Cut to eight weeks earlier and Tim (our future captive), is taking in a movie with his mother. Afterward – and at the behest of his father – both mother and son enter a cab and make for home. But the mundane ride home takes macabre twist when taxi-cab driver Bob – a mentally unstable killer played by Vincent D’Onofrio – decides to make little Tim’s mother his next unwitting victim. Forced to endure Bob’s depravity up close and personal, Tim is suddenly orphaned and in the lair of a maniac. Our killer, having done his deed, sees the presence of the child as a new-found opportunity. Does he use little Tim as a mere slave to help him in his daily carnage? Or does he decide to do something even more sinister … to mould Tim like clay in his image – to make the boy a protégé out of untarnished innocence and teach him the art of death…

It’s an original premise, and before going any further we must shine the spotlight on the director: Jennifer Chambers Lynch – a surname synonymous with surrealist filmmaking. After the debacle of her debut Boxing Helena (an outing this reviewer never saw but knew of), Jennifer fled the broad audience and delved into more minor pursuits … reminiscent, perhaps, of her father David Lynch. While Chained reflects nothing of David’s unique – some would say Lynchian – cinematic style, it is still imbued with enough disturbing and violent moments to warrant a small comparison. Shot in a mere fourteen day period, Jennifer’s technique is domestic, claustrophobic, and all too real. With only two central characters, this is the sort of get-under-your-skin creepiness that leaves a lasting impression.

Fast forward to many years later and little Timmy is all grown up. Now resembling a gaunt rock star, mentor Bob continues his slow methodology of indoctrination. Given the dehumanizing nickname of ‘Rabbit’, our padawan-in-training still retains his adolescent conscience and mild mannered innocence. Rewarded accordingly – and metered out with punishment in the same the same token – little Rabbit tries to find a subtle chink in Bob’s armour … a monumental task given that Bob – living in rural isolation and anonymity – has perfected his killing art.

To call this film ‘unrelenting’ is an understatement – and it’s outings like Chained that reinforce something the collective horror tribe has always known: that you do not need a monumental budget or prestigious studio backing to create an indie masterpiece. The only flaw – and with a second viewing I had grave doubts it was a flaw – was a shocking ‘twist’ ending that’s an almost unnecessary addition. It’s a small blemish, because the rest of the film is faultless in almost every department. Here, Jennifer Lynch translates our real-world horrors with a skill and dexterity seldom seen – and we can only hope this talented director decides to call horror her home.

Note:  Matthew Tait’s latest book, Dark Meridian (Volume 1), is now available at http://www.amazon.com/Dark-Meridian-Volume-Matthew-Tait/dp/0615821669.  Be sure to buy it today!