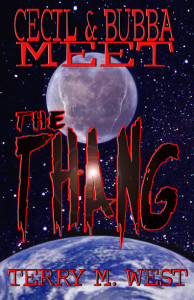 Wherever Texas rednecks Cecil McGee and Turner “Bubba” Teague find themselves lately, supernatural trouble ain’t too far behind. In Cecil & Bubba Meet the Thang, the latest novella in author Terry M. West’s Cecil & Bubba series, the loveable losers are pitted against an “evil alien son of a bitch” determined to wipe out all of humanity – the titular “Thang” – and the results are mixed.

Here there be spoilers and a wee bit of backstory:

In our first introduction to the hillbilly duo, Cecil & Bubba Meet a Succubus, Cecil and Bubba, well, meet a succubus. The two friends take work as hired muscle for a ghost hunter on the night before Halloween. The ghost hunter directs them to a haunted house in the middle of nowhere and it’s here the three of them make contact with Hattie Mae, a woman who made a deal with the devil and has since become a succubus, using her sexual prowess to suck the life force out of any man under her spell. Add to the mix the curse bestowed upon the boys a few nights earlier by a drunken Gypsy and things certainly don’t go quite as planned.

The events in Cecil & Bubba Meet the Thang take place the following evening – Halloween. Hattie Mae, an evil succubus mere hours ago, is now a lot less evil and a little more human thanks to Cecil’s exit strategy the night before. She’s found work at the Busty and Lusty Club and it’s under the stage lights and copious amounts of glitter and mirrors and dollar bills where she reconnects with Bubba, who works as security. Cecil, in the meantime, is getting a large dose of reality from his daddy – he won’t be taking over the family business when the time comes; McGee’s Gas, Garage and 24 Hour Convenience will be given to his sister instead of him. The bad news puts a damper on Cecil’s evening shift so he puts up the closed sign at McGee’s Gas and grabs a six-pack to drink his sorrows away.

Hattie Mae and Bubba show up at the gas station just before two FBI agents with van troubles roll in. Cecil agrees to fix the busted vehicle while the feds go get themselves a drink, but gets more than he bargained for when the precious cargo tied up in the back uses its mind control to make Cecil set it free. The thang escapes from its enclosure and now Cecil and Bubba find themselves in the middle of yet another supernatural throw-down.

Succubus originally appeared in West’s fiction collection What Price Gory? and I would recommend beginning your travels into the world of Cecil and Bubba with that short story (as well as the enjoyably macabre holiday poem Cecil & Bubba Meet Santa, available online for free with a quick search) before diving into their meeting with the thang.

The Thang is pegged as a horror-comedy but it didn’t quite fulfill what it set out to do. It has all the elements for some hilarious situations (clueless rednecks? Check. An evil alien? Double check. A dismembered head who’s a little crass? Yes, please!), and I did find myself cracking a tight-lipped smile here and there, but overall the story felt more horror-sci-fi-dramedy as opposed to just straight up horror-comedy.

That being said, The Thang is not a bad story. Far from. It’s engaging and well-written; it’s easy to picture the characters in their natural surroundings, from the strip club to the gas station (it’s basically how I imagine the typical deep-country folk spend their time: working at the family business during the day and relaxing at the local strip club at night…or vice versa).

The Cecil and Bubba series has potential to do great things and with that Gypsy curse still looming over their heads, I’m sure we’ll be seeing more of the hillbilly heroes in the near future.