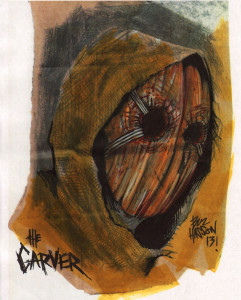 Ok, this caught my eye and I just had to let all of you know about it.  It turns out that 13 year old Emily DiPrimo in New Jersey is going to make an 80s throwback slasher film, and she’s gone to Kickstarter to help fund it.  Her dad, who has made a couple of films in the past, is helping her out.  So, why don’t you visit the site, check out what they have to say, and maybe help out.

CARVER is a throwback, 80’s style slasher film. It was co-written and will be co-directed by 13 year old Emily DiPrimio.

The Story of Carver

Carver is about a group of teenagers who are haunted by a despicable act they committed on Halloween when they were younger. Their actions caused the deaths of three innocent people. Now, on the anniversary of those deaths, an ominous calling card in the form of a carved pumpkin has been placed at each of their homes. Someone is out for revenge. The question is…who?

Carver takes elements from the great slasher films of the past and morphs them into one thrilling story.  We know Freddy, Jason, and Michael are the killers in their respective films.  While Scream, My Bloody Valentine, and The Prowler keep you guessing as to who the killer may be.  In Carver, we introduce a menacing unstoppable killer, but no one will know who is under the mask until the climactic scene.

About Me & My Dad

When I was four, my dad wrote a short script called WAKE, and he cast me in the film.  I can still remember how much fun we had making the movie.  I learned first hand that when a group of people band together towards a common goal, anything can be accomplished.  I’ve been hooked ever since.  Since then, we have made one feature length film calledSorrow Hill and several short films-the most notable being For Love of Zombies and The Playground.  Both films have played in horror festivals across the country.

My dad came up with the idea for Carver several years ago, but it never progressed further than an outline.  That is, until I found out I needed ankle surgery this past January, which caused me to be off my feet for 12 weeks.  I was really down and my dad noticed and asked if I would help him write this script he had been thinking about for a while.  Before I knew it, we were writing Carver together which made the 12 weeks fly by.  After we finished the first draft, I remember the pride I felt at having helped write a pretty darn good screenplay.  I asked my dad if we could make it and of course he said we could try, but it takes a lot of time and money to make a feature film correctly.  That is why I am here on Kickstarter- to humbly ask you to help me make my dream of making a slasher film with my dad come true.  Now check out the awesome stuff you can get if you back us.