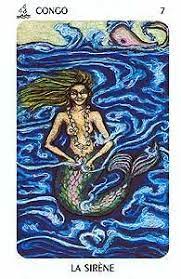 Sample card: Congo (Water) La Sirene. “This is the card of the mermaid. While her realm is the ocean or world womb, her human qualities give her access to the mysteries of the land. She is the great bridge between those who inhabit the fathomless depths of the seas and the creatures of dry land. She is the water form of Erzulie and Agwe is her husband. In terms of Chesed she also acts as a connection or a bridge between Agwe and La Baleine, the whale. La Baleine moves freely along the ocean floor and is privy to their secrets. From her, La Sirene has much to tell Agwe.

La Sirene, as her name implies, is a loa responsible for the sake of songs of the Voodoo ceremony. These songs combine Music and the Word to generate the fascination that so strongly focus the attention of the Voodoo devotees. Here once more, La Sirene bridges two elements, music and the spoken word.

Her card emphasises blue, which is her colour. the card of the mermaid. The whale shown swimming behind her is La Baleine, the great Mother of the Sea. La Sirene is companion to the whale and transmits the generative power of the oceans in the sphere of the emotions. She is a creature of two worlds, bridging the gap between the solid land and the ever shifting waters. Her primary attitude her primary attribute is emotional connection. Her power is that of empathy.

Contemplation. We stand with one foot in the Visible World and the other in the World of the Invisibles.  We operate as a connection or a link between these worlds. La Sirene is the emotional component of this link. In her has found the emotional force to bridge this gap.

Divination. In affairs of the emotions there is to be a bridging or adjoining of elements. A marriage is the most obvious manifestation, whether the elements of the marriage or two people or a bridging together of ways in which the world is being perceived. The Siren song of deception, causing one to forget his or her will.”

The deck is based on African, West Indian, Haitian and New Orleans Voodoo, with Santiera, Catholic and other influences. They draw on Rider-Waite and Thoth Tarot, including Kabbalah’s Tree of Life and Golden Dawn – Thelemic interpretations. It is Eclectic, and explains the complex tradition, of working organically with the Voodoo spirits, and of the personal insights of the author that are intended to teach, advise and initiate. The art is sombre and harsh. It is darkly spiritual and is not intended to be pretty.

In depth information on the topic of Voodoo, the Loa spirits, on the nature of sacrifice and the materials required for it, on possession, on ritual drawing, on the relationship with Tarot and Voodoo. Rituals for use with the cards, and birthing cards and blessing them. There are several spreads, quotes, background explanations, how to use the deck, and all information a reader would need to get the best from this concept deck.

There are all new titles for this extraordinary Tarot deck. Each has an image, number and title. The suits are divided into Petro, Congo, Rada, and Santiera. In the book, we have the traditional Tarot titles given with a drawing, and with information on meaning, characters and philosophy including Kabbalah. Also a contemplation is provided and a few words of divination for each card. Suits are split into Aces – Tens for the elements, and with the 16 Court Cards titled as Temple Cards of Kings, Queens, Princes and Princesses.