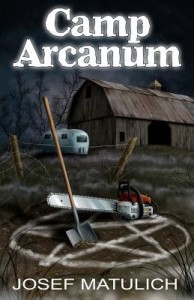 Marc Sindri is a no-nonsense contractor, building ren faire villages across the country. Marc has a reputation  for delivering miracles. He must build a working fairground in seven months with his assistants, Michael the artist and Eleazar the ren faire specialist. Normally, just keeping Michael and Eleazor from killing each other would be enough of a complication for one job, but this is Arcanum, Ohio, and Marc soon learns that Arcanum is the Mayberry edition of Salem, Arkham and Collinsport, all rolled into one hotbed of Demonology, Wicca, and assorted supernatural shenanigans.

Marc is a pragmatic, more comfortable with power tools than personal interactions. So when he starts to fall for Brenwyn, head of the local Wiccan coven, he can’t decide if there is real magic in the air or his family history of schizophrenia is beginning to kick in. When it turns out Bren is the ex of Jeremiah, a professor of demonology and metaphysics at the local college, things get even more complicated.

Through it all, Marc finds strength in his chainsaw and power tools, even as his deadlines are complicated by demons, dragons, cultists and attacks by undead skinless bunnies. Normally, things can’t get much worse than starting your day by battling conjured otherworldly beasts with a shovel, but this is Arcanum. Just when things look like they’ve hit the bottom, Marc shows up with his shovel.

As Marc haplessly tries to navigate between romance, unspeakable evil, and clear cutting a sacred grove, his complications accumulate as quickly as his injuries. When a demon is summoned to destroy Marc and his crew, the beast is Lovecraftian in nature but the description is pure Matulich: “This thing was more than just ugly: it was layered like a parfait, ugly over repulsive over pure malevolent evil.” Seriously, your hero is being pummeled by the tentacles of a beast best described as a drive-through order from the Dairy Queen in Hell and it’s still not the worst thing that’s happened to him. Welcome to Arcanum.

This is the first novel by Josef Matulich, who approaches the material like he’s studied the work of Robert Bloch and Jeff Strand, seamlessly blending horror and humor into a distinctive voice of his own. Based on the ending of Camp Arcanum, it is the first in a series planned by Matulich. That’s a bad thing for a certain beguiled contractor, but it’s a very good thing for readers.