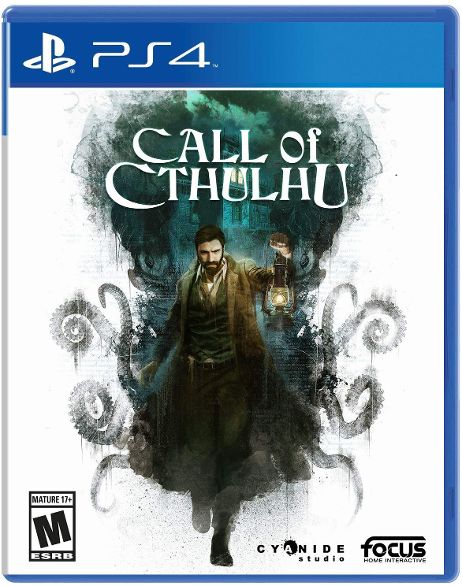 Lovecraftian cosmic horror is one of the hardest flavors of horror to translate from his excellent stories to other mediums, and while a number of films have managed to do it, a far lesser number of video games have managed to pull off that trick. So here comes one called Call of Cthulhu, based off the excellent pen and paper role playing game of the same name that has been around, loved, and critically lauded for nearly forty years. This is an official adaptation, so clearly this game is going to do things right…right? Well, grab your trench coat, .38 revolver, your gummiest shoes, and your well-thumbed copy of the Necronomicon and let’s find out.

The game is set in a first-person shooter format and is an RPG so you get a handful of stats and skills you can raise as you see fit to make your character more to your liking. Want to play a doctor with an interest in weird things? Raise your Medicine and Occult skills right at the start. Want to be the tough, noir-drenched detective archetype? Well then focus on your strength and investigation stats. You will get experience points as you play to increase these, as well as find old tomes to raise some of them up, too.

You play as a private investigator named Edward in the 1920s, a veteran of the Great War who is down on his luck and likes to drink a little too much. A rich guy comes into your office, asking you to look into the matter of his (missing?) daughter, an artist who lives in an isolated New England fishing village located on a craggy, foggy island with the oh-so charming name of Darkwater. The lady always had macabre tastes in the subject matter for her paintings, but recently things have been getting much, much worse. Oh, and her family is dead, they all died in a fire that most think she, herself, set. In fact the woman is believed dead, but her daddy doesn’t think so, so it’s off to Darkwater Island with you to find out what is going on. So right off the bat this game gets big points for getting the feel of the pen and paper RPG Call of Cthulhu right, and to some extent, H.P. Lovecraft’s vision. The setting and setup are both perfect, it is fun to hear the occasional period appropriate music on the radio, and most of the lingo used by the NPCs sound both quaint and true. So things start off strong.

Things do take a step back when the game begins in earnest. The graphics are not great and some of the characters you interact with look and move very mannequin-like. If you are expecting this game to look like the recent Red Dead Redemption II or other AAA games, you will be disappointed, but then this game was made for less than a tenth of that title so some of that can be forgiven. More troubling is the lack of, well everything else in this modern game. The town of Darkwater is a shell of a place, with fewer than twenty buildings total and far less than half of those allowing you to actually interact with them. It also does the “streets/paths blocked by people, cars, boxes, etc.” thing a bit too often to keep you from going off the beaten path and into parts of the already sparse town the game designers didn’t bother to actually design. This is acceptable but in both the design and looks department it does make the game feel old, as in last-gen old. Is that a huge crime? No, but it is noticeable. That said, it does pull off moments of atmosphere well, and for a horror game that is important.

Then the game takes another step in the right direction with its initial play and pacing. It starts off as a regular, albeit creepy, mystery that you have to solve, with the more horrific and Lovecraft/Cthulhu stuff not coming into things until sometime later. Oh sure, there’s the occasional weird dream and other jarring bit, but this game does a pretty good job at keeping to a measured pace and not overplaying its horror hand too quickly.

The way you can approach problems is nice in that you are not limited to just one solution. Take the first real problem you must overcome: getting into a warehouse that is guarded by some bootlegging gangster goons. You can go to a nearby ruined building, find an old waterway that would give you access to the warehouse, scavenge some missing parts to fix the winch that opens the gate to that watery path, and then if your strength score is high enough use that to gain access. Failing that you can approach the gangster boss and try to talk your way in if your eloquence skill is high enough, but you’ll end up “owing” her a favor to be paid back at some later date. Choice is great in games, so once again that’s a point in the win column.

Sadly, for a game like this you would expect some clever puzzles that need to be solved in order to proceed and, well, there really aren’t any. That is, unless you think flipping obvious switches to open a door puzzling. There are some bits where you recreate past events in your mind, but these are pretty rote and not interactive in any way. You basically click on a few items and then move on. Wow, riveting. Also a few times there are stealth elements/areas and these are mostly out of place and often forced. So yep, another check in the close-but-not-quite column. Lastly, at many points in this story the game feels more like a (slightly) interactive movie than a full-blown video game. It not the dreaded “walking simulator” or even as egregious as many of the games from Tell Tale (R.I.P.), but it is noticeable. That said, I wasn’t bothered too much by those times, although I know some gamers will be.

Then, as you would expect in a game with Cthulhu in the title, your character will start to lose his mind and go a wee bit insane. While not as prevalent, surprising, or fun as the insanity effects in the old Eternal Darkness game from 2002, these mental meltdowns are fun. They are handled well for the most part, if not being all that frightening, as are most of the Cthulhu elements when they do start popping up. But it should be said that for the most part this game wasn’t all that scary and for a horror game that is a misstep.

Lastly, the game says it can be replayed many times with many different endings based on your investigation and what various insanities your PI has picked up along the way. That’s good as the game is on the short side and can be beaten in about six or seven hours. But honestly I don’t know if a different ending would be worth it for me to play though things again and do basically 90 percent of things the same way.

Call of Cthulhu is atmospheric and respectful to the source material, both the pen and paper RPG and the original Lovecraft tales and the strengths of this title is its story. Where it does stumble is the gameplay. It doesn’t do anything really bad, but it never does anything all that great or memorable, either. As someone who has had extensive experience with the original stories and the role playing game, I was left feeling that they both deserved more and could be realized better. So if you are a fan of the Call of Cthulhu RPG or of Lovecraft, then I do think you will get a kick out of this game and I do recommend it. If not, I still think you should give this a try if you like horror and mystery games, but perhaps wait for a good sale to nab it. In summation this one is good, but not great.