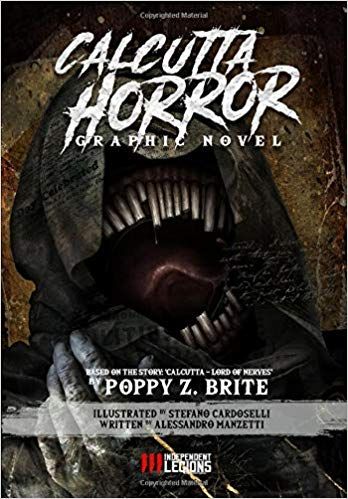 I’m just going to start out by saying that Calcutta Horror is powerful stuff! This is what we’ve come to expect from Bram Stoker Award-winning poet and writer Alessandro Manzetti and frequent collaborator Stefano Cardoselli. Together, they bring Poppy Z. Brite’s short horror story Calcutta, Lord of Nerves to life! Cardoselli’s black and white artwork explodes across the reader’s eye like a strobe light illuminating shadows. Flash! Our narrator stands hollow eyed on an overcrowded street. Flash! The undead shamble on twisted limbs, looking for their next meal. Woosh! The hospital on fire, weeping ash onto a horrible landscape that only promises death. Flash! The goddess Kali’s predatory smile as she moves like lightning. Words and art fitting like a hand inside a leather driving glove – seamless!

Calcutta Horror is like a carnival of the dead bursting like fireworks in the brain. The words paint the colors of life despite extreme hardship in a city overpopulated to bursting. It is a beautiful, yet horrible tale of a young man seeking his true home. He returns from the gleaming cities of America to Calcutta, a place with sacred cows pissing in the streets. So foreign, yet familiar because it was imprinted on his mind at birth. The narrator tells his epic story by bringing us full circle to a polluted river that burns with the stench of death but somehow still carries life. Calcutta is sensual, deadly, exotic, and humble city where the dead run wild and the living crawl.

Calcutta Horror rates a super big FIVE STARS! This excellent celebration of Poppy Z. Brite’s writing gives us a guided tour through a terrifying place that previously only existed in our imaginations. Full of dark doorways, hidden places, and huge public spaces that are just beyond the crusty, disease-infested hovels. This is a timeless treasure that you will want to read again and again. Between the bold artwork by Stefano Cardoselli and the haunting words by Alessandro Manzetti, there is something new to see on every page. Highly recommended!

A bonus for me was the chance to learn more about Poppy Z. Brite, who is a groundbreaking author in many ways. Her chatty, detail filled writing reminds me of Truman Capote and Ray Bradbury. It draws you in close before knocking you to the floor. Great stuff! Much of Poppy Z. Brite’s work is currently available from Independent Legions Publishing and can be ordered online from Amazon.com. Be sure to include Calcutta Horror in your weekend reading plans. Get your copy today!