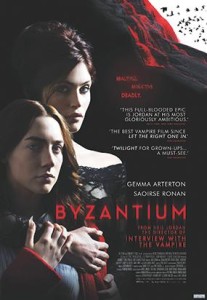 Neil Jordan is a filmmaker whom I admire and one who frustrates me from film to film. He is a fine director and has made a couple of excellent films that are true classics but throughout the years he has been courted by Hollywood and his work since then has been hit and miss.

His first film of note is a true sleeper in the horror community. The Company of Wolves is a nice take on the Red Riding Hood legend and features some great transformations. He followed that up by creating one of the finest character dramas ever made, Mona Lisa.

Hollywood came calling and he made another horror film, albeit a comedy, the travesty that was High Spirits; an ill-conceived comedic ghost story that was a massive disappointment. Still in Hollywood he did another big budget flop, the remake of We’re No Angels starring Robert DeNiro and Sean Penn. The film was another travesty.

Returning to his independent style he gave us the masterpiece character thriller, The Crying Game. Jordan had his first major box office smash and the respect of the film world.

The director wanted to return to his horror roots and was chosen to helm the massive production that was to become Interview With the Vampire. It was a huge smash and received mostly positive reviews. I feel the film is flawed but very good and has many fine horror elements. With that film, I feel that Neil Jordan was primed to become a major force on the horror scene.

He gave up on horror and straddled Hollywood and indie film, always producing better product outside of studio interference. His 2010 fable Ondine, about a man who falls in love with a mermaid, was a wonderful film as was his 1999 drama The End of the Affair, but his 2007 female Death Wish wannabe The Brave One was the worst film of his career. He made a small return to horror with 1997’s In Dreams but it is almost laughably bad.

Now, almost 20 years after his last foray into horror films, Neil Jordan gives us the new vampire film Byzantium. The buzz and excitement surrounding this film was high. Everyone was anxious to see the new horror film from a man who, while only making a few, has excelled in the genre.

The verdict is fifty/fifty. Byzantium has atmosphere to spare and has a good creepy look. It has an interesting story and is well cast. However, the film crawls at a snail’s pace in almost every moment and our attention never peaks, as it should.

Clara, Gemma Arterton, and Eleanor Saoirse Ronan, are 200-year-old vampires on the run from an all male vampire clan called The Brotherhood. Clara runs a brothel out of the hotel Byzantium while Eleanor befriends a sickly youth named Frank.

All of the characters from vampire to human are written and played with such a sense of dread that any enjoyment or empathy is not to be found from the audience. In Interview With the Vampire, Jordan gave the somber proceedings an elegant look and feel. Here the film is cold and dreary and lacking in emotion.

The leads are good, especially Ronan, but are not given enough depth to fully develop on screen. The film wants the screenplay to dictate the tragedies early and then carry them through the film on the characters faces. Dialogue is sparse and it hurts the film. The backstories of these two vampires, and the vampires who are after them, are rather interesting and shape the fates of these characters. Unfortunately for the film, it is not enough to see the pain, fear, and longing on the faces of our leads. We needed more verbal interaction.

Structurally the film is uneven. The modern sequences, while needing more dialogue, work and are interesting. Clara’s over protectiveness is leading to their doom but Eleanor is unable to stop it. Dramatically it is very intriguing but it is never fully explored.

The flashback sequences in the 19th century give us a good backstory as to how this all happened but are sluggishly paced and overacted by the British actor Johnny Lee Miller. These scenes make us long for the extravagance and quality of Jordan’s superior Interview With the Vampire.

Byzantium is so close to being a good horror film that it is frustrating. It just doesn’t have enough forward momentum. It sets up its premise and characters but stalls out just when it should get going. The narrative is too broken to keep us involved.

Neil Jordan is a fine filmmaker and I will always see his work, especially his horror films. Byzantium is a return to his horror roots but falls short of its promise. It is a slow, drawn out, failure.