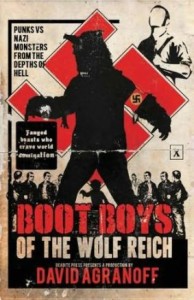 David Agranoff’s gem of a coming-of-age novel may not get the attention it deserve. You can blame that on the title and the cover. Now don’t get me wrong. I love the title and the cover art. That catchy title, Boot Boys of the Wolf Reich clearly communicates the promise that we are going to get our share of Nazis and werewolves. Plus the cover by Matthew Revert is a brilliant takeoff on the 60s grind-house exploitation films that thrived on plots that featured lurid topics like monsters and Nazis. How can you not like a blurb that shouts “PUNKS VS NAZI MONSTERS FROM THE DEPTH OF HELL!” and “Fanged beasts who crave worldwide domination”? Yet it hides the fact that the author, while eventually rewarding us with plenty of violence and horror, has crafted a circa 80s coming of age novel which explores a slice of life that has been ignored for the most part in literature.

Paul and his parents have moved into the city. His ex-hippie parents tolerate his skinhead lifestyle and Paul is out to meet some new friends into the same things. He finds some like-minded people, not to mention a girlfriend, but also discovers there is plenty of tension between his SHARP buddies and a local white supremacist skinhead group. Switch focus to former Auschwitz commander Klaus Schroeder who is in exile but ready to revive the glories of the Third Reich. In his possession are dark secrets that will be irresistible to Nazi skinheads yearning for recognition, power and acceptance.

Yet it takes more than half of the book to really get into the Nazi werewolves. Instead, we get something more inspired. We follow Paul on his rite of passage in his group which, unlike the Nazi skinheads, believes in racial acceptance. They are SHARPS, which stand for “Skinheads Against Racial Prejudice”.  Agranoff writes about what he knows and does it with knowledge and compassion. Most of his older readers, like me, will probably have the common misconception of punks and skinheads in the late 80s as racially bigoted. I had to look up the definition of “SHARP” and “Straight Edge”. But the author is not necessarily writing to us. He is writing for his generation which already knows this. Regardless, he writes about them well, illustrating that they had the same types of doubts and peer issues that permeate all cultures. Paul’s mix race ex-hippie ex-militant parents seem like all parents; concerned and puzzled over their child’s choices yet reluctant to admit that their own choices as teens were not necessary sensible either. But I did wonder how many readers of the author’s generation had to look up who Fred Hampton was!

The author does a nice job describing and building the tension between the two factions of skinheads and this is what fuels the arrival of Klaus and his dark secrets. It is to the author’s credit how well he merges the coming-of-age plot and the lurid pleasure of Nazi monster terror without ever losing the original themes. There are some good characterizations here especially with the white supremacist skinhead Sonny whose desires and doubts become realistically conflicted.

This is an exceptional short novel that delivers on its promise of horror but delves into bigger issues by someone who understand the generation it speaks to. I recommend this book to all lovers of horror fiction regardless of age. The hardcore horror reader will not be disappointed. But I would also advise the prospective reader to come for the Nazi werewolves but stay for the social and family themes. Thoughtful horror fiction like this is getting increasingly difficult to come by.