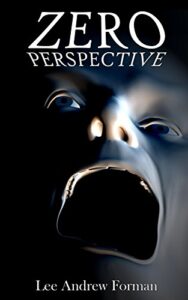 It is tragic that no one can hear you scream in space, as the visitors on the Esometa are desperately calling for help. John and his crew of fellow astronauts are on a rescue mission in an unforgiving and dangerous environment. At least they are hopeful there are survivors to rescue. Soon, they realize they are lost, but not in the traditional sense of the word. Their surroundings are mercilessly chameleon-like. At one moment, the characters think they are in a familiar hallway. They soon come to realize that the hallway never ends. Later, they are in extreme darkness; then, they are falling into a seemingly endless pit. The plot is akin to Alien in Wonderland. And yes, there are monsters.

The characters are stuck in some intergalactic purgatory, which is strategically vague yet relentlessly creepy. The atmosphere is simultaneously claustrophobic and agoraphobic: the walls seem to be closing in, yet the alternative is the expansive and unfathomable space.

Zero Perspective is a horror/sci-fi blend that is heavy on psychological scares. The novella does not provide much in the way of backstory; instead, the reader is left to uncover the circumstances surrounding the mission. Forman is a strong writer, and I was particularly fond of the ending (which I will not give away). It is definitely a page-turner and one that I will most likely go back to in order to see if I missed any subtle clues on the first read.

Zero Perspective also includes the short story The Taking of Leon Winchell. The setting could not be more different from the novella (a Renaissance faire), and yet the same psychological drama and unease is threaded throughout. I read Zero Perspective on my Kindle and did not realize at first that there was another story to read. Don’t let that happen to you!

I highly recommend this novella/short story pairing. They are engaging reads providing the type of chills that one may find in episodes of The Twilight Zone and Black Mirror.