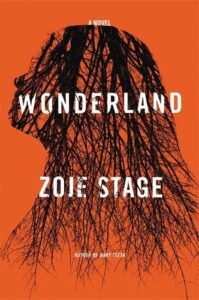 Zoje Stage’s follow-up to her terrifically horrific debut BABY TEETH is a chill-fest set deep in New York’s Adirondack Mountains entitled WONDERLAND. It has drawn comparison to both Stephen King’s THE SHINING and the work of the legendary Shirley Jackson. With a little bit of luck and the right amount of promotion, this novel could claim its own cult status.

For those that are familiar with the Adirondacks, you will already be aware of how majestic and haunting that entire area is. It works as the ideal backdrop for Stage’s latest novel and utilizes the sense of dread and isolation that can also accompany a stay there during the height of winter (which seems to last nearly 9 months long these days). The Bennett family has relocated from New York City to a town just outside of Saranac Lake. The parents, Shaw and Orla, had made a pact to each other early on in their relationship. Shaw would support Orla’s career as a ballet dancer and instructor until the time came for his career as an artist to take the forefront.

Now, with their children in tow, they have settled into the house in the Adirondacks where Shaw can finally have his art studio and allow his work on landscapes and other subjects to thrive. Orla immediately senses that something is off with their family cabin in the woods but holds back on sharing this for fear of raining on Shaw’s lifelong dream. Things in WONDERLAND move quite quickly at this point. The Bennetts are aware that they are at least an hour’s drive from the nearest big city, and have already begun to experience all of the events that come along with the discovery of a haunted house.

To begin with, their home is blasted by record-setting snowfall that immediately closes them off from the outside world. The only problem is they are quite sure that no snowstorm was forecast and that they may be the only location in the area to have been hit by it. The entire family begins to see and hear things, and they wonder over all the standard causes like a murder taking place there, the home being built on haunted property or the cabin just being a portal to another world. Readers will continue on with dread to see if a strong-willed mother like Orla can save her family from whatever evil has them trapped in the forest. A winner from start to finish.