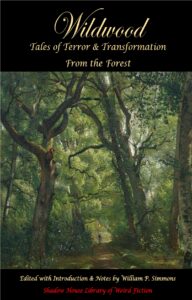 Wildwood is a love affair with the untamed. It contains classic horror stories where the horrific is not limited to the the monsters and demons of the woods, but can also be found in the stifling boredom of cultured society.

Wildwood contains stories from the 19th and 20th centuries, and there are some familiar names mixed with authors who are lesser known but deserve a second look. I noticed several themes amongst the stories.

Forests create freedom. In the bizarro “The Story of a Panic” by E.M. Forester, readers are treated to a biased narrator who is constantly committing micro aggressions against the other characters. For instance, he shames the Italians who, with their “garlicky breath,” lack the culture that he feels belongs exclusively to the English. When discussing the oddities that have been seen in the woods, with the inn’s landlady present, he insults, “there are no ladies here.” He is the closeted and blinded version of culture that cannot see how stifling social rules can be. He has no patience for Eustace, the young boy who comes to desire the woods.  Eustace feels his room is too small compared to the tree-lined canopy beyond. Despite its humor, “The Story of Panic” contains a subtle undercurrent of horror. Other stories in this collection follow this theme of the woods being the only place where man can truly be himself.

Forests stir passion. In H.B. Marriott Watson’s “The Brazen Cross,” a Christmas Eve stroll unleashes a devilish energy. Christmas Eve is when the spirits of the woods come alive, and when a man is captivated with a woman who is not his betrothed, the landscape latches onto the infidelity. Algernon Blackwood’s “The Touch of Pan” delights in bacchanal passion. It also has a great hook:

An idiot…was a person in whom intelligence had been arrested—instinct acted, but not reason. A lunatic, on the other hand, was someone whose reason had gone awry—the mechanism of the brain was injured. The lunatic was out of relation with his environment; the idiot had merely been delayed en route.

This classification is continued throughout the story, with reason being severely lacking compared to an unbridled, uncivilized passion for nature.

Forests are inhabited by cruel and deadly creatures. “The Wind in the Woods” by Bessie Kyffin-Taylor tells of a terrible murder that recurs during a yearly haunting. “The Music on the Hill” by Saki demonstrates that even the most idyllic pastural scenes have a violent undercurrent.

Forests make us doubt our senses. In “The Dead Valley” by Ralph Adams Cram, the narrator and his friend Nils travel through the titular valley and experience a horror that Nils later denies ever happened. Did Nils repress it? Was it a dream? And why did they both fall ill immediately after?

H.F.W. Tatham’s “The House in the Wood” tells of a figure that routinely appears at the edge of the woods. A boy, feeling he has no option but to investigate, ends up in a charming house. He finds a salve within that he wipes on his eyes, and is able to see that things are not charming at all. The stepmother in “The White Wolf of the Hartz Mountains” by Frederick Marryat seems a bit harsh but harmless. Then the children begin disappearing.

The simmering eeriness of these stories are not for those who like gore and extreme horror. Wildwood is for fans of the gothic, who have a taste for realism and naturalism, and appreciate the harsh reminder that, while highly evolved, humans remain dangerously vulnerable to nature.