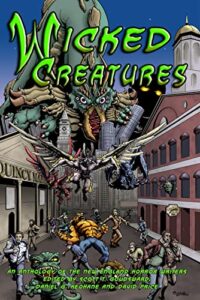 Anyone who knows me knows that I love creature features. There is nothing more entertaining, more comfortingly familiar, than a story about a tornado filled with killer sharks, or a murderous sofa. Wicked Creatures takes on my beloved subgenre with all of the gusto of Godzilla trampling Tokyo. I am also a great fan of the anthologies put together by the New England Horror Writers (NEHW) and if I were asked to rank them, Wicked Creatures would be nestled near the top.

Like most NEHW offerings, there are poems interspersed with stories. The writers are high caliber, and the stories are all engaging. As always, I have a few favorites.

The book starts off strong with an offering by K. H. Vaughan: “Massive Entity-17 Bernardo Carpio.”  In this story, a group of Kaiju came from the sea, but it has a different feel than the monster flicks we know and love as the people are causing more havoc than the monsters.

Another favorite was “The Mumble Man” by James A. Moore. This story was simply cool—from the setting to the dialogue to the nuanced scares. The horror started with the graffiti. Then, the neighbors started dying. Their deaths were related to the graffiti, but not in the way one may think. Again, very cool.

“Carving Grace,” by Kristi Petersen Schoonover is built around the premise: “if you’re happy, the Wailing Women will come for you.” The characters are forced to hide their happiness out of fear, until Grace falls for a visiting artist. Schoonover is also acting as artist in this story, with running images of ships’ heads that gives it an eerie maritime feel.

“Silver Leaves and Moth Wings,” by David Bernard keeps true to Moth Man lore by having the creature walk a thin line between benevolence and violence. As with the “real” Moth Man, it is not entirely clear if the creature is just in the wrong place at the wrong time, or is a catalyst of catastrophe. The gossipy tone of the narrative is very engaging.

“Wood You Love?”  by Rob Smales is whimsical and creepy at the same time. It has a lovely fairy tale quality, and I kept guessing what type of creature the main character was (which is something for this cryptozoology fanatic).

And what would be a monster book without a nod to Mary Shelley’s famous creation? In “Heart of Frankenstein,” by Trisha J. Wooldridge, the sins of the father maintain an iron-clad grip. Wooldridge fills in where Victor Frankenstein left off by providing a mate for the creature. The mate is more than the monster bargained for, and has a monstrous nature of her own. A very clever story.

In J. Edwin Buja’s “There Is No 23:38 Westbound,” the reader finds out that there actually is a 23:38 Westbound, but it is not a train you want to board. For instance, we are told that one character “screamed and tried to die faster, but it still took far too long.” As with all creature features, some characters are expendable, so their horrible demise is not too upsetting. That said, the deaths in this one were still pretty gruesome. There is also a great twist at end.

“The Thing in the Window” by D. E. Ladd contained a nice mix of Victorian gothic and ancient Aztec horror. Those can be difficult to blend, but Ladd handled this mash-up with a deft touch.

Any snowy landscape inspires terror in me; too many winters barely surviving Nor’easters has left me mentally wounded. Throw in some cannibalistic monsters, as Daniel R. Robichaud did in “Keep on Trucking,” and I am a happy reader.

If the future is anything like it is represented in “Fifteen Years from Now,” by Howard Odentz, I will be happy to punch out sooner. This story features an environment that is as bleak and hopeless as it is terrifying.

And my final favorite was “The Ookie Birds,” by Paul McMahon. Richard’s dad had written a script for a cartoon. Richard just wants to settle his father’s estate, but the Ookie Birds have other ideas in mind. There is a nice character arc that I was not expecting, and the unlikeable Richard really redeems himself.

NEHW always has great covers for their anthologies, and this one, by Ogmios, is no exception. It is eye-catching and perfectly suited for the works within. I highly recommend Wicked Creatures, it is a fun one!