Book Review: WHAT FESTERS WITHIN 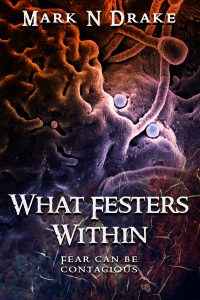 Over the last couple years, Mark N. Drake has created and developed a fictional place, Darkisle, a foreboding island inhabited by Lovecraftian horrors and cultists, where he has set two previous novels, The Gathering Shadows and Those Under the Hill, as well as several short stories. Drake has returned to Darkisle with his third novel, What Festers Within, continuing the adventures of two-fisted 1920s-era detective Jack Glennison as he battles against various occultists and Mythos horrors. I had a lot of fun with this one, as I did the first two books in the series—it’s a terrific blend of Cthulhu Mythos lore with pulpy action and thoughtful investigation.

I can’t help but think this third outing was at least somewhat inspired by the coronavirus pandemic, as one of the major plot threads is a mysterious new illness that is overtaking Darkisle. Jack is joined by an old companion, Josine, a young American woman being pursued by cultists who we met in previous books. Jack and Josine travel back to Darkisle—at some point they might as well set up shop there—to aid Dr. Hardy, a local physician and friend who fears that the illness sweeping the island may have its origins in a strange substance that Jack (and the reader) know that the Mi-Go left behind. Unsurprisingly, as with the last Darkisle book, the Mi-Go are the primary antagonists in What Festers Within, though Drake also introduces his version of the Deep Ones to the island. Darkisle really does seem to be a kind of interdimensional crossroads that is far more important to the fate of humanity than its small size and backwater location might suggest.

While What Festers Within wraps up pretty neatly, the epilogue makes clear that there are still plenty of remaining mysteries on Darkisle in need of Jack Glennison’s services, as well as a reminder that Jack’s own past still has depths left to plumb. I’ve been following Jack’s investigations from the beginning and am very much looking forward to seeing where Drake takes us next (presumably back to Darkisle, where mysteries and terrors always seem to be right around the corner).

As I’ve noted in past reviews of Drake’s work, I’m always impressed by the clarity of his prose. Like its predecessors, at no point does the plot of What Festers Within depend on characters doing stupid things or behaving irrationally; everyone here behaves sensibly and according to their own best interests. Glennison is likewise a clever and thorough gumshoe who takes reasonable precautions, follows up on his leads, and conducts a solid and logical investigation. That’s no small thing—I’ve learned that I certainly can’t take it for granted when I read crime/detective fiction—and a testament to Drake’s careful plotting and writing. Having said that, What Festers Within is not a dull or plodding police procedural; there’s certainly plenty of action, car chases, gun battles, and fisticuffs. Jack Glennison is not one of those lily-livered academics who faints at the first sight of eldritch glyphs or the ichor of some unspeakable terror.

What Festers Within is definitely recommended, though if you’re new to Drake’s Darkisle, I suggest you start with the first in the series, The Gathering of Shadows.