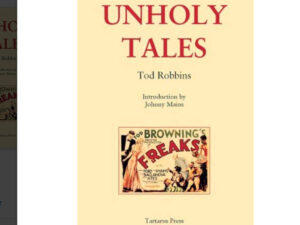 Clarence Aaron Robbins (1888-1949), widely known as Tod Robbins, was an American writer  nowadays mainly remembered as the author of a novella, Spurs, and a novel, The Unholy Three, which provided the basis for two successful movies.

“Spurs”is a cruel tale set in the world of a circus full of weirdos, or to be more precise, of freaks. And “Freaks” is the title of the controversial film released in 1932. “The Unholy Three” is a complex work featuring a midget, a ventriloquist, and a Herculean giant who—formerly working in a carnival, having left   the show due to a deplorable incident—turn into criminals devoted to burglary. The first screen version was a silent movie directed by Tod Browning in 1925, while the remake, a sound version, appeared in 1930, directed by Jack Conway. Lon Chaney Jr. starred in both versions, and the remake was the only  sound movie he ever played before his death.

Both “Spurs” and “The Unholy Three” are very entertaining, offbeat stories: maybe rather unusual for the taste of contemporary readers, but certainly endowed with a vivid, enjoyable narrative style.

The present volume, published by the British imprint Tartarus Press, also includes the stories “ Silent, White and Beautiful,” a superb tale where a man awaiting capital punishment tells about his peculiar murders; “Who Wants a Green Bottle?”, the terrifying report of a journey to hell and the attempt to save a soul by sealing it in a green glass bottle; and “Wild Wullie, the Waster”, a gentle ghost story with a humorous taste.

For those readers who tend to skip the preface of any fictional work, I strongly recommend the splendid, exhaustive introduction by Johnny Mains, which provides an extraordinary, enjoyable insight of Robbins’ restless life.