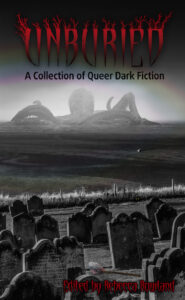 My biggest regret is that I could not complete this review in time for Pride month. Perhaps that is a good thing, as Unburied is a powerhouse that can remind us that Pride does not have to be relegated to one month of the year. The word “unburied” denotes a refusal to relinquish a hold on life, and the stories in Unburied are about the battle scars that remain when the true essence of oneself refuses to be defeated.

Unburied is a mix of horror (many subgenres), science fiction, and psychological thrillers. The stories included are fantastic and gripping. The anthology opens in my favorite way: with a nightmare. “Sweet Dreams” by M.C. St. John tells the story of Harold, whose son calls out for him in the night. While his husband sleeps, Harold explains to the child that the “underbed witch” is simply a bad dream. He then begins to question if that is the truth.

Another strong story that questions the veracity of a supernatural spirit is “Open up and Let Me In,” by Laura DeHaan. Dana is haunted by images of her murdered wife. She sees her in pictures and mirrors and computer screens. In this case, the ghost is a configuration of guilt and lust, but that does not make the apparition any less deadly.

Other standout stories include “When the Dust Settles,” by Sarah Lyn Eaton, which is about asteroid minors who are fitted with prosthetics after they suffer accidents at work. The prosthetics are owned by the Company, and the artificial limbs and organs seem to have a mind of their own. “The Red Candle,” by Louis Stephenson, hit a chord with me as some of us were lucky enough to have had witches for grandmothers who were able to see us in our true form.

“Razor, Knife” by Elin Olausson belongs to the family of creepy twin stories, only in this case the twins are cousins. The story is atmospheric and eerie.

I also enjoyed “The Other Boy” by Laramie Dean. I am not really able to summarize the plot beyond a creepy reappearing boy, but it is a fun story to unravel. “Cut Off Your Nose to Spite Your Race” by J. Askew has compelling sci-fi fertility elements, and “Some Kind of Monster,” by Azzurra Nox, has an awesome hook: “It was dark in the monster’s belly.” I loved this story about a one-night stand gone terribly wrong.

Some of the psychological horror/thriller stories were a bit “too real” to make it onto my faves list. They were well written and were page-turners, and I appreciate the bravery of the stories for exposing the real-life horror that people face, but I want to escape with my fiction and forget that we live in a world of torturous cults, domestic violence, and where children are routinely abused and abandoned. That said, the beauty of these stories is that the feelings of neglect, isolation, and psychological abuse are universal and something that all readers can relate to whether they consider themselves part of the LGBTQ+ community or not.

Overall, I loved Unburied. It is a strong and powerful anthology in terms of writing, themes, characters, and plots. With its inclusion of various genres, there is something for everyone. I give Unburied my highest recommendations.