Book Review: THE WORST IS YET TO COME 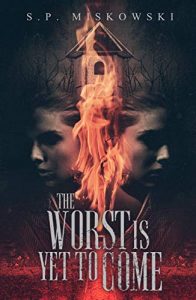 The Worst is Yet to Come
S.P. Miskowski
Trepidatio Publishing
February 22, 2019
Reviewed by Elaine Pascale

Middle school student Tasha Davis meets new girl, Briar Kenny, and it feels like fate. The girls are in sync with each other even though they don’t seem to have many other friends, and their lives are completely different. Tasha comes from a close-knit, educated family, while Briar lives with her dysfunctional mother and her mother’s loser boyfriend.  While Tasha has the structured, nurturing home life that Briar craves, Briar has a rebellious streak that Tasha admires. A sudden violent act solidifies their bond, and awakens unexplained forces that hint to a larger history of their town.

Likewise, the rules of magic are not explicated. While I would not want expository rambling, magic is used differently in different stories and I would like some insight into how it works here. Are the bad spirits (I don’t want to call them evil yet, per the issue stated in the previous paragraph) enemies of witches, and why? What is the story behind the spirits?

I was informed going into this book that there would be a sequel, so I did expect for there to be a bit of a cliff hanger. That said, I would have liked more of a resolution or for at least one of the plot lines to resolve its conflict.

I will gladly read the next installment. At this point, Tasha is the most sympathetic character, but I am even more interested to see if certain characters come face to face with karma.