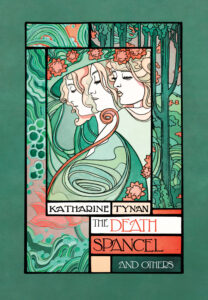 A prolific mainstream author, Irish writer Katharine Tynan also penned a number of supernatural and macabre stories, now assembled for the first time in an elegant volume published by Swan River Press. Bookended by an interesting introduction by Peter Bell and some non-fictional material by or about the writer, the volume collects fourteen stories, plus some poems.

Most of the stories are of remarkably high literary quality, showcasing Tynan’s ability as a writer  in terms of both  plotting and wording. “The First Wife” is a perceptive, gentle ghost story describing the discreet appearances of the spirit of a long dead wife, while the short “The Sea’s Dead” is a gloomy but fascinating tale where the cruel power of the sea destroys lives and hopes.

The title story, “The Death Spancel,” is about  an insane, destructive passion with a supernatural side. Another story with a similar title,“The Spancel of Death,” is a cautionary tale depicting the dire consequences of black magic.

In the well crafted “Sentence to Death,” a misinterpreted premonition affects the mind of a wife-to-be, and in the atypical ghost story “The Dream House,” we discover that a phantom is not really a phantom.

“A Bride from the Dead” is a creepy tale turning into a love story, while the excellent “The Body Snatching” is a gruesome piece set in a Dublin devastated by the smallpox. The vivid, terrifying “A Night in the Cathedral” describes a terrible battle with a pack of hungry rats, but is slightly spoiled by an unnecessary happy ending. And in the ghostly and melancholic “A Picture In the Wall,” a tender love story is tainted by an unavoidable destiny.

On the whole, a great collection recommended to any good fiction lover.