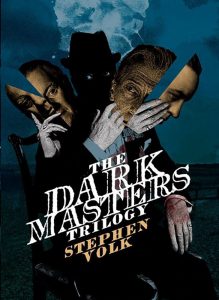 It’s always a treat reading British authors, and Stephen Volk is no exception. His latest work is THE DARK MASTERS TRILOGY.

Volk is a wordsmith who wears many hats. As a script writer for film and television, he’s creating such gems as GOTHIC, THE KISS, THE AWAKENING, and the TV movies GHOSTWATCH, CYCLOPS and AFTERLIFE, as well as episodes of MIDWINTER OF THE SPIRITS. Three of his collections have previously been published: DARK CORNERS; MONSTERS IN THE HEART; and THE PARTS WE PLAY. He’s won a British Fantasy Award, a BAFTA (British Academy of Film and Television Arts) award, and been a finalist for the Bram Stoker and the Shirley Jackson awards.

Why mention all his creds? Because if you don’t normally read British writers and if you haven’t encountered Volk, or haven’t known you have, his credentials act as fair warning: THE DARK MASTERS TRILOGY will permit you to luxuriate in suspended disbelief. This master storyteller of plots that grip and dialogue that crackles stitches together with invisible threads fact and fiction in a thoroughly engaging read.

THE DARK MASTERS TRILOGY is three stories. Whitstable, his wildly successful novella, originally published in 2013; Leytonstone, published two years later in 2015; and the original Netherwood. These are delicious works that combine biographical information and imaginative fiction about late, well known masters of the dark creative arts.

– Whitstable, set in 1971, takes us to the seaside town in south east England by the same name, which the actor Peter Cushing called home.  Cushing, as everyone knows, was famous for starring in a multitude of horror and mystery films, some of the most popular being the role of Van Helsing in various Dracula movies, including the classic HORROR OF DRACULA with Christopher Lee, and Doctor Victor Frankenstein in another batch of movies about Mary Shelley’s monster. At the other end of the spectrum he played Sherlock Holmes in film and on TV, and Grand Moff Tarkin in STARWARS IV. In Whitstable, we encounter Cushing the man, crushed by grief over the death of his wife, whom he loved dearly. But in the course of trying to find a reason to live, it is through being forced to play the role of monster hunter in real life that meaning may possibly be restored to his existence. This is a sad and poignant story and the horror he encounters is reality based.

– Leytonstone, set in 1906, is a town just northeast of London, the birthplace of film director Alfred Hitchcock. Hitch’s nearly 50 suspenseful films included the shocker of its day PSYCHO, as well as MARNIE, THE BIRDS, NORTH BY NORTHWEST, VERTIGO and many others. His popularity only increased with the TV program he hosted—ALFRED HITCHCOCK PRESENTS—which featured creepy half hour stories of murder, mayhem and the macabre. But Volk focuses on the future director as a child in Leytonstone, taking us through the dreary and constricting working-class life that became the underpinnings of a cinematic genius. His half Irish, half English parents sent him to a strict Jesuits school. Despite a doting mother, the novella includes the often-told story of the horrific trick his father played on him. Volk paints a compelling portrait of fact skillfully merged with fiction that shows how these dark, cruel and strange formative years shaped the budding visual artist and led to many dozens of film award wins and nomination,…but at a price.

– Netherwood takes place in 1947 and features the prolific best-selling novelist Dennis Wheatley at the peak of his thirty-year career, a specialist in both thriller and occult works of fiction whose books sold millions of copies. Six of his over fifty novels were turned into films, including: THE DEVIL RIDES OUT; THE LOST CONTINENT; TO THE DEVIL…A DAUGHTER. While Wheatley often wrote about the occult, Volk presents us with a man who wasn’t that much of a believer—until he’s summoned to Netherwood, near Hastings, south of London on the coast of the English Channel. He leaves behind his comfortable home and his loving wife and possibly his sanity to answer the demand to appear before the aged-but-still-powerful and infamous Alistair Crowley. Crowley, close to death, insists that the paranormal is real and that Satanic power begets Satanic power and is a threat. Only Wheatley can take on this threat that will not only infect the world at large but have direct and disastrous consequences on individuals. The writer is not sure what is real and what isn’t, but the stakes are high for a man who may not put much stock in black magic, but who is a solid believer in a higher power that insists on protecting the innocent.

The Dark Masters Trilogy is a well-written, well-researched work of horror that, among other things, lauds men whose names survived their time on Earth. Readers will be in awe of Volk’s writing style and his precise use of language. (Those who favor ebooks will be glad of the embedded dictionary). The sinister sexual elements throughout each of these stories is, unfortunately, all too common in the modern world. All three protagonists are transformed in some way by the dread that fate tosses at them as the line between fact and fantasy blurs. None exit as they entered. These are dark stories that deserve to be read.