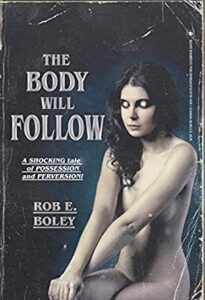 Carrie is one of the more complex heroines you will ever encounter in horror or any genre of fiction. She takes the concept of the unreliable narrator to a completely different level. You see, Carrie has recently been possessed by a serious gang of dark spirits, or Wishes, as she calls them. When she finally came out of this possession, she found that not only had she lost a good deal of time but also had her life completely trashed—no more home, job, friends, or family to speak of. What is a once-possessed young lady to do?

This is the core of this unique tale of possession and revenge from author Rob E. Boley entitled THE BODY WILL FOLLOW. Boley takes what could be a purely dark subject matter and brings it down to earth, sprinkling enough sarcasm and dark humor to make Carrie’s plight feel that much more human.

Carrie was a physical fitness buff, running daily in preparation for various races. She also takes various classes like self-defense—which is where the title of the novel came from. Her self-defense instructor informed the class that when in close combat with an attacker, grab any part of their face or head and the body will follow. Boley continues to refer back to this phrase as a metaphor for Carrie’s possession experience.

During her blackout possession period, Carrie gorged herself in a primal need for food and sex. Mostly sex, to the point where several embarrassing videos went viral, thus losing her the respect of her friends and family. Even though she probably has contracted every venereal disease on the planet, she still wakes up from her post-possession funk to find herself in bed with a young man named Daniel. It takes some coaxing, but she eventually gets Daniel to understand what she went through and even gains his assistance in locating the poor soul whom her band of dark spirits has latched onto next, to save them from her fate.

This is not easy, as the Wishes are everywhere. Carrie also came out of the experience with an unwanted new power—she can see dead people. Not in the same way as you might think, however. The ghosts she sees appear to be very human, and these dead souls are bound to the earthly realm in such a way as they actually feel pain when hit with something, walked through by an unassuming human, etc… THE BODY WILL FOLLOW is a quick read but packed with very different takes on traditional possession and ghost-hunting themes that make for an intriguing ghostly read.