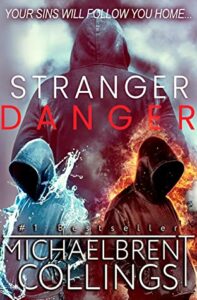 Stranger Still is a stand-alone sequel to Michaelbrent Collings’ horror thriller Strangers, which I reviewed way back in 2013, and Stranger Still, which I reviewed earlier this year. I enjoyed both previous novels very much, so was happy that Collings decided to complete the trilogy. (I suspect he’s got a fourth book in the series planned, given this one’s ending.) In Stranger Danger, the serial killer Legion travels to a rundown city to teach his “lessons” to new targets. There he finds an urban hellscape torn apart by gangs, racial strife, and police corruption, with the powerful preying upon the weak. This is the perfect setting for a fast-paced collision between Legion and lots and lots of evildoers, with extreme amounts of violence along the way. Legion also meets Officer Candela Garcia, one of the few honest cops just trying to do right by her son Chase and the people she is sworn to protect, despite countless obstacles thrown against her.

I might compare Legion to an amalgam of Jeff Lindsay’s Dexter, Marvel’s Punisher, and Jigsaw of Saw fame (minus the deathtraps—Legion is much more of a hands-on kind of guy). Legion is a stone-cold killer, a torturer, and a tormenter of those he wishes to inflict one of his “lessons” upon, as his father “taught” him in his childhood. In his own twisted way, Legion nominally attempts to instruct others in why they need to be good, with his instruction typically taking the form of torture and death.

In Stranger Danger, he has a new set of pupils: instead of a normal suburban family with secrets, as in the original novel, or the career criminals and those caught up in their crimes in Stranger Still, now Legion has turned to the inner-city slums of a decaying town in which the cops are little better than the crooks, and likely seem more like an occupying army than guardians to the residents. Over the course of the trilogy, Legion has metamorphosed into almost a kind of avenging angel, or at least a dark spirit of vengeance who watches others and ensures they suffer (emphasis on suffer) their just desserts. That can be oddly cathartic in a world in which we see countless evildoers go unpunished for their crimes every day.

Characterization is key, and we have a good swath of fun characters to explore here. Legion is a genuinely creepy dude, and he’s going up against an array of interesting freaks and villains—that’s really what the book’s premise hinges on, I think: Legion has got to be scheming against people who are just as bad if not worse than he is for him to be at all sympathetic. They have also got to be interesting, and we have that here too, with the highlights being Wolf, a white supremacist gang leader with a complicated history and personal ties to single mom/cop Candela Garcia; Mr. Nasty and Mr. Nice (who is not, as it turns out, nice), Wolf’s bodyguards and chief enforcers; and Wyatt Clayborne, Garcia’s partner and chief example of everything wrong with the local police department. Garcia and her son Chase are interesting characters for at least two reasons: (1) They are clearly on the run from their pasts, and that takes the bulk of the novel to be resolved, and (2) Garcia’s son is slowly being seduced by Wolf, a white supremacist gang leader, which sets Chase up as a potential victim of Legion. As in Stranger Still, Legion is now “accompanied” by his dead brothers, who he calls Fire and Water, given their methods of death, who comment upon everything he witnesses. It’s an interesting conceit, and gives Legion an engaging inner monologue, though I found Fire and Water’s infantile regression and antagonism toward each other a little grating at times during the first half of the book.

As with previous entries in the series, Stranger Danger’s pacing remains tight and I found the action, horror, and violence satisfying. Additionally, Stranger Danger is, dare I say it, a timely work of horror for 2020, with a focus on deteriorating race hatred, police corruption, and urban violence. Collings doesn’t give us caricatures, though; we get a glimpse into the untenable situations and impossible choices that have led many of the characters in Stranger Danger into the positions in which they find themselves. How comfortable are you with a serial killer and torturer as a vigilante and anti-hero? Let’s face it, there are a number of protagonists like this already—if you’re already interested in characters like the Punisher or Dexter, this is going to be right up your alley, and much as I love Batman and his never-ending war to clean up Gotham, his methods are not all that far off from the rest. There were times when I actually wanted more Legion; in a few sections he’s mostly absent, and I really wanted him to remain the center of our focus. In any case, Legion does bad things to bad people. He’s…disturbed, to say the least, but we live in a disturbing world, and Legion is far from the only one who is steeped in villainy here. If that premise works for you, I think you will find this one satisfying. This is a stand-alone novel, but I do think the reading experience would be enhanced by reading the first two novels in the series before this one.