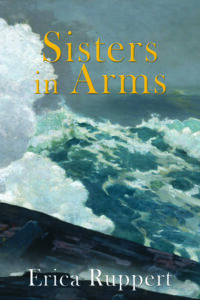 Having grown up on Lovecraft’s “The Shadow Over Innsmouth” and related pastiches, I’m a sucker for stories of forlorn coastlines, desolate seascapes, and inhuman creatures that periodically emerge from the ocean to wreak havoc. Throw in a reclusive group of women (the Sisters of Providence) whose history is intertwined with these amphibious humanoids, and I couldn’t be more excited. Erica Ruppert’s novella Sisters in Arms didn’t disappoint.

Michelle de la Fortuna is a graduate student whose research has brought her to a remote area of the Massachusetts coast that has some connections to Michelle’s own family. It’s a place of strange disappearances, a nearby village—devastated by an epidemic—that is now uninhabited, and the home of the Sisters of Providence, a secular group of cloistered women who have maintained a vigil on the coast for many decades. So what are the Sisters doing there all these years? Why are they remaining watchful? Michelle meets the last of the Sisters and begins exploring the order’s history and purposes. She ends up getting answers to her questions, but, well…she pays a price.

This is not the story of two-fisted investigators duking it out with Deep Ones. This is a story about history—personal, family, and hometown—and perhaps more importantly, the burdens of history. I felt the weight of that history as I read Sisters in Arms. But it’s not exactly quiet horror either. There’s a kind of brooding foreboding that overlays the story from start to finish, but there’s also genuine menace and physical threats that go well beyond just a sense of unease. Scott R. Jones described this one as “Generational horror with a great Occult Seventies feel.” I think that’s exactly right. Setting Sisters in Arms in the seventies aids in both the isolation and the difficulties of learning about the past; there are no cell phones to dial the police and no Internet-accessible databases to turn to. But that seventies vibe carries throughout in more subtle ways too, and I think was integral to the plot: the twenty-first century is a world of connection, and Sisters in Arms is all about disconnection, making the seventies the perfect temporal setting for the story.

Ruppert’s storytelling is vivid: she’s got a small number of characters richly described, a setting that is as familiar as it is disquieting, and a true threat that emerges from the sea. On that point, I would be remiss if I didn’t note that there were times I found myself genuinely unsettled by what I was reading. Though her use of the supernatural is understated, Ruppert has a way of describing the monstrous in a compelling kind of way that not many other authors can replicate. This is a slow burn toward real horror. Very much recommended.