Book Review: SEEDS OF THE DEAD 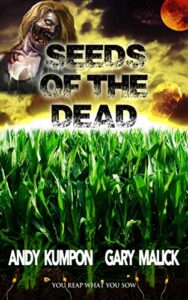 This eco-horror tale was also featured with the sub-title: Genetically Modified Zombies! A tale of a deadly viral outbreak in our bioengineered food. Well, they’re definitely not giving away TOO much of the plot in that lengthy title!

SEEDS OF THE DEAD made me immediately think of the cult horror film Soylent Green, which featured a terribly overacting Charlton Heston screeching out: “Soylent Green is people!” I have no doubt that this memory existed somewhere in the minds of authors Kumpon and Malick when they penned this novel, which seemed destined for B-movie horror filmland.

Peter Malick is a shining star as a food engineer working with the huge food syndicate called Moonstar Foods Inc. With overpopulation and food scarcity becoming a global concern, Moonstar has opted for bio-engineering their products to contain GMO’s, or “genetically modified organisms.” However, when some of the animals they are testing these organisms on turn into crazed, zombie-like creatures, Malick gets a hint that there could be a harmful reaction if people ate these products as well.

Malick is at a moral crossroads whereby playing the role of whistleblower could definitely be career suicide for him. He opts to do the right thing, believing that he is still young and talented enough to land work at a more credible organization. What he didn’t plan on was that Moonstar would hold a grudge in a big way. They focus on Malick’s small hometown and bombard them with their deadly contaminated food products. Now, Malick has much more to worry about than just squealing on a bad employer—he needs to use all his smarts and experience to try to save his town from becoming a mass of ravenous zombies!

SEEDS OF THE DEAD was a quick and light read, but good fun, if you are just looking for that dose of horror told with a good dose of black humor.