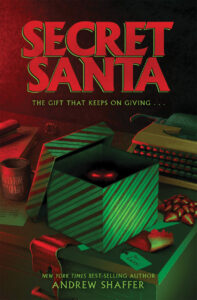 It’s fairly obvious in the latest release from author Andrew Shaffer, SECRET SANTA, that he has primarily written humor and satire, because there is enough ‘dark humor’ infused in this one to make even the biggest Grinch smirk this holiday season.

There is a prologue set during World War II, where two U.S. Army officers discover something on a Christmas Day in Merkers, Germany, that will haunt them for decades to come. One of those soldiers was Xavier Blackwood, who is the publisher of Blackwood-Patterson Publishing. Action quickly shifts to 1986, where a horror publisher named Lussi Meyer is meeting with Mr. Blackwood in an effort to find a job. She was let go months earlier when her long-time publisher merged with another house and her job became a casualty.

The interview does not go well. However, on the way out, Lussi bangs into one of the bookcases in Mr. Blackwood’s office and reveals a box that has an odd-looking doll inside it. In fact, it resembles a similar doll Lussi remembers from her childhood. Almost immediately following this, Blackwood has what appears to be a major stroke, and ends up passing away a few days later at the hospital.

The doll in question Lussi knows is called a Perchten, a German word for this unique object which is said to ward off evil entities, amongst its many properties. When Lussi goes to visit Mr. Blackwood just prior to his passing in the hospital, she meets his son, now the new owner of the publishing house, and talks him into letting her come on board as horror senior editor. The publisher is in bad shape, and Lussi is given only a month to come up with a hit horror novel or they are all sunk.

Lussi digs up a novel from a British author she worked with at her last firm, who has what she feels will be a sure-fire best-selling vampire novel. SECRET SANTA is appropriately set during the Christmas season and Lussi is quite surprised when, at the company Christmas party, there is a Secret Santa gift in her name under the Christmas tree, even though the gift exchange had taken place prior to her hiring. Inside her box is none other than the mysterious Perchten doll. Needless to say, what transpires next is straight tongue-in-cheek, B-movie style horror where everything and everyone who gets in Lussi’s way of publishing her hit novel—even the secret cult in the office—had better watch their backs! An entertaining and fun holiday horror read.