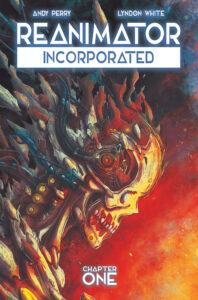 Reanimator Incorporated is a retelling of Lovecraft’s “Herbert West – Reanimator” with a strong influence of Mary Shelley’s Frankenstein. This is not surprising, as Lovecraft claimed his story was meant to be a parody of the famous science fiction work. The graphic novel opens with a quote from the “Scream from the Dead” serialized part of “Herbert West – Reanimator,” and we are off and running. The illustrations drew me in immediately. White captures the hazy ambiance of 3am with such authenticity that I felt angry at “being awake” at that ungodly hour even though I was looking at the image at midday. Great details are incorporated into the drawings, such as West drinking from a mug embossed with the wording, “SCIENCE: because you don’t figure shit out by praying,” and when his supervisor calls him, his cell phone contact for her is “the Witch.”

We open with West in the laboratory with his colleague, Cain. They are trying to reanimate the corpse of a migrant worker that is neither entirely fresh nor in one piece. There is a tension between the two as Cain prays over the corpse, which West finds disdainful.

West is a singularly-minded scientist, so much so that his wife and son feel emotionally abandoned. The character of the son, Mike West, is a nice nod to the parental abandonment theme of Frankenstein. Mike is also a scientist, and in direct competition with his father for resources. They are both under the patronage of Erica Clapham-Lee, whose corporation was handed down to her from her grandfather. Erica has personal reasons for wanting these experiments to succeed beyond the public promise of ending pain, suffering and loss.

Tragedy strikes during the race to reanimate successfully, and West is left to ponder the impact of his legacy. As in many science fiction stories, Reanimator Incorporated strongly hints that there are things science can’t explain and that there may still be a place for faith in our modern world. Chapter One ends with a marvelous cliffhanger, leaving me anxious to find out what happens next.