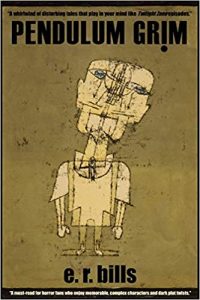 For the past seven years, Texas author E.R. Bills has published a steady stream of nonfiction books with titles like Texas Obscurities and The 1910 Slocum Massacre: An Act of Genocide in East Texas. Before that, his regular op/ed pieces in the established him as a critical dissident voice in Texas history and politics. Since 2016, Bills has helmed the annual release of the horror anthology series Road Kill: Texas Horror by Texas Writers. In December of 2019 he ranged even further from his traditional turf with the publication of Pendulum Grim, a collection of eerie tales authored exclusively by Bills himself.

The first thing one notices about Pendulum Grim is the manic, potentially disturbing art on the cover. It’s a reproduction of the 1922 painting titled Gespenst eines Genies (Ghost of a Genius) by Swiss-born artist Paul Klee (1879-1940).

This is a slender volume containing only eight stories, and though it may leave the reader wanting more, it most definitely delivers the unexpected twists and turns, horrific plausibility, and nightmarish world-building horror fans crave.

Beginning with “Minerva’s Vision,” Bills constructs a uniquely Texan scenario in which a deformed but spiritually beautiful woman gradually develops her psychic abilities, only to arrive at a moment when she has no future, but experiences love with reckless abandon. The second offering, “Tarry Tornado,” mines the glory days phenomenon Bruce Springsteen so aptly exploited decades before, but with a hellish perspective worthy of a demon. Third in the line-up is the story from which the anthology takes its name: “Pendulum Grim.” E.R. Bills riffs on the oft-cited legendary disappearance of author Ambrose Bierce with astute imagination, and delivers a creation that flows with the smooth energy of a Grover Washington sax solo.

“The Halloween in Me” originally appeared in Road Kill Volume 2 (Eakin Press, 2017) and depicts the unfortunate revelations of a suburban family man when he learns the full truth surrounding All Hallow’s Eve. “The Judge” is the title of the fifth story in the book. Something about this tale of a police detective’s sordid investigation of an enigmatic murder brought to mind the works of Theodore Sturgeon. It has the same gritty, down-to-earth façade disguising a world that is far stranger than the lead character supposes. Number six is “A Dark White Postscript,” which was also originally published in the Road Kill series (Volume 3, HellBound Books, 2018). This sinister exploration of the supernatural fallout resulting from a small-town lynching has much in common with some of Bills’ nonfiction work, and has the depth and development of a novella.

Probably the most disturbing story in the mix occupies position number seven. “Recumbent Female Nude” is likely to offend sensitive female readers with its intimate view of the inner workings of a necrophiliac’s deviant mind. “The Chalk Fairy” is a bite-sized bonbon of a tale, providing the closing note in this ominous opera of 135 pages. Despite its brevity, “The Chalk Fairy” offers a full dose of the dark imagination that makes Pendulum Grim a standout horror collection of 2019.

Pendulum Grim is available in e-book and paperback formats from Amazon.com.